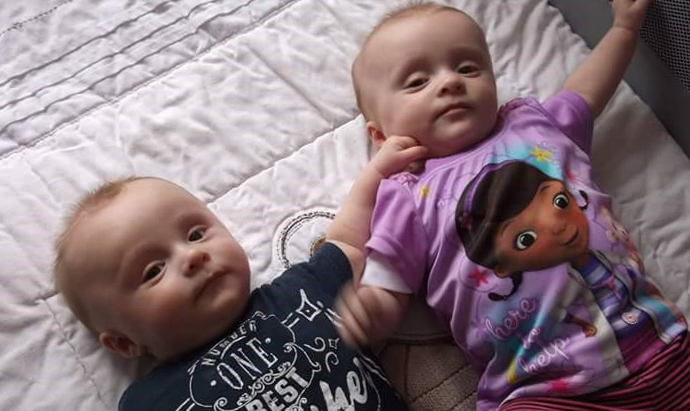 A rare genetic disease meant having more children of his own was a risk Ian could not take. But donated sperm gave the couple hope.

When Charlotte fell in love with bus driver Ian nearly ten years ago, he explained that as he had already had a vasectomy she might have to choose between him and having children.

“Ian carries a rare gene and had the vasectomy for medical reasons,” explains Charlotte, from Ipswich. “He already had three children and two have severe special needs. “I was 26 when I met him and I had always wanted to have children. When he explained the situation I just thought he was so wonderful that I would accept that by being with him I may never have a child of my own.”

The couple met when Charlotte got on Ian’s bus every day to go to work. “We had a mutual friend who gave me his phone number,” she laughs. “I invited him out for a drink and the rest is history!”

They got married, but as Charlotte reached her thirties she began to think again about starting a family.

“I asked Ian what he thought about the idea of fertility treatment using a sperm donor and he was completely behind the idea,” says Charlotte.

“We were not entitled to treatment on the NHS but my parents offered to pay for it so we got things moving very quickly. Bourn Hall had been recommended to us by a colleague of my mum’s so we went along for an appointment.”

First Charlotte had a Fertility Check which included a HyCoSy (a tubal patency test using an ultrasound dye). Her tests came back clear, so initially Bourn Hall treated Charlotte using donor sperm with a procedure called IUI (intra-uterine insemination). This is a less invasive treatment for patients than IVF.

Unfortunately Charlotte did not fall pregnant after the IUI so the second attempt was by IVF. This requires medication to control the cycle and stimulate the ovaries. Disappointingly, she ovulated too early and there were no eggs available for treatment.

The third time, Charlotte and Ian went to Skegness for a holiday while she was going through treatment, and travelled to Bourn Hall’s Cambridge Clinic every other day for check-ups. She thinks this helped her to relax as this time she produced four eggs. These were fertilised using ICSI, where a single sperm is injected into the egg, resulting in two embryos that were transferred to her womb.

“The day before I took the 14-day pregnancy test my breasts started to feel swollen but I didn’t want to get my hopes up. On test day I did the Bourn Hall pregnancy test and also one I had bought from the chemist and then handed one of them to Ian so we could watch them at the same time. When they both showed up positive we were absolutely stunned!”

The couple had another pleasant surprise when they went to Bourn Hall for a seven-week scan and were told that they were expecting twins.

“We had been hoping for twins,” reveals Charlotte, “so we were really pleased. Ian started crying when the nurse broke the news to us; it was lovely.”

After a smooth pregnancy Charlotte gave birth to Hattie and Anthony in January 2016 and has found looking after two babies much easier than she thought it would be. “They are such relaxed babies,” she says. “We have got into a really good routine with them – they are just a joy.”

Charlotte, now aged 35, and Ian, aged 50, cannot thank their anonymous sperm donor enough: “We are both huge advocates of sperm donation,” she says, “and really want to promote it.

“I would like to reassure anyone thinking of using a donor that they shouldn’t feel uncomfortable about it or worry that they might feel differently towards their children. “My husband is 100 per cent the twins’ dad and it is wonderful. He is not remotely bothered that we used a sperm donor. People even comment on how much Hattie looks like Ian!”

The couple have nothing but praise for Bourn Hall Clinic and even gave their children middle names after two specialists who treated them.

Named after consultants that brought hope