Beth’s tips for anyone on the fertility journey “Don’t look too far in to the future, just focus on what you need to do to get to the next step.”

Beth’s periods became erratic when she came off the contraceptive pill, this was the first indicator that the Beth and Rob might struggle to conceive.

“It wasn’t something I had experienced before,” says Beth. “I knew something wasn’t right.”

Beth had wanted to be a mum ever since she was a teenager. “I remember getting that urge of wanting a baby and I thought that it would pass and it never did.” she says. The couple met when she was 19.

“I was training to be a nurse and we decided to wait until I had got my career sorted before we had a family. I qualified when I was 24 and a year later we started trying for a baby.”

“I had just turned 25 and didn’t think I would have any issues getting pregnant, I don’t think anyone does really,” she says.

Struggle to become pregnant took over

Beth admits that she began to struggle emotionally.

“I started tracking my ovulation using an app on my phone and the whole process of trying to track my ovulation just completely took over,” she says.

“I don’t think that I was in a very good place, it completely took over and was constantly on my mind. I would take my ovulation kit in to work and then if it looked like the right time I would contact Rob and say ‘we will have to have sex tonight’ and it just took the fun and joy out of being together, it was not a nice time.”

When Beth wasn’t pregnant after a year later she went to see her GP.

Beth and Rob were sent for tests which revealed that Beth had polycystic ovaries and a lower than average egg store for her age whilst Rob’s sperm tests also indicated a low morphology – or movement.

“There were a number of factors affecting our ability to conceive as a couple,” says Beth.

The couple were told that they would need IVF treatment but Rob needed to lose weight before they could be referred for NHS-funded treatment. “I also did what I could during that time, taking vitamin supplements and doing more exercise,” says Beth. “It became all-consuming. I hadn’t expected to be told that we would need IVF but I just thought, if this is what we need to have a baby I will do it.

“I never allowed myself to think that I would never have children, I just kept thinking about the next step to try and stay positive.” 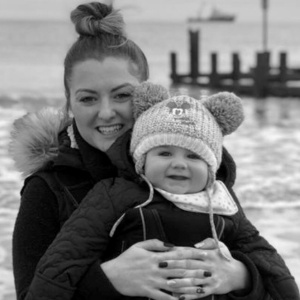 Once Rob had reached his target weight the couple were referred to Bourn Hall Clinic in Wymondham, near Norwich and attended an Open Evening to find out more about the treatments available.

“I didn’t know anyone who had gone through IVF and it was a comfort to see other couples in the same situation as us,” says Beth.

One embryo had been frozen after their first treatment and Beth and Rob returned to Bourn Hall for a Frozen Embryo Transfer. “It was nice because it was a shorter protocol, “ says Beth. Two weeks later Beth found out that she was pregnant but sadly she had an early miscarriage.

Despite their setbacks the couple were determined to try again. “It was never a case of not having IVF again,” says Beth. “But I did want to let my body recover and to deal with as much as I could for myself to increase my chances next time around. I exercised, ate healthily and took diet supplements as well as having acupuncture and fertility massage which both really helped me.

“I just tried to do all I could to be kind to myself because I wanted to feel that I had done everything I could to help my body.”

Next time around and Beth did feel different. “I was definitely less stressed,” she says. “I knew the whole process much better and what to expect with injections and scans. I was in a much better place mentally and wasn’t Googling every symptom either.”

For all of their treatments at Bourn Hall the couple’s IVF treatment had also included ICSI (Intracytoplasmic Sperm Injection) which involved directly injecting one of Rob’s sperm into each of Beth’s harvested eggs.

For their next treatment the couple had three embryos which went to the blastocyst stage and had two frozen whilst one was transferred to Beth.

Beth took time off work after embryo transfer to try and relax as much as she could. “By Day 3 I had a hunch that I was pregnant,” she says.

“When it came to test day I was so sure I was pregnant that I would have been more surprised if the test had been a negative than a positive,” says Beth. “We were both so excited when we saw the positive test result.”

Son Henry was born in May 2019 at the Norfolk and Norwich Hospital and Beth is loving every minute of being a mum.

Focus on one step at a time

“Being a mum is everything I thought it would be,” she says. “When you are in the thick of trying to have a baby events like Christmas and Mother’s Day can be difficult when they should be a happy time and so it is nice now to look forward to those dates and them not be a negative.

“What I would say to anyone else starting out on their fertility journey is that we all think that we have life planned out and that we will meet someone, settle down and have a baby, but it doesn’t always work like that. Expect the unexpected and if you do need help with getting pregnant look after yourself. Don’t look too far in to the future, just focus on what you need to do to get to the next step.”