“Even offering one try on the NHS offers hope, we are proof of that,” says Donna from Cambridgeshire.

“Cutting the NHS funding for IVF has a dramatic impact on people’s lives and mental health,” says Donna from Cambridgeshire talking about what her rainbow baby means to her. “Even offering one try on the NHS offers hope, we are proof of that, we had one try and were successful. This isn’t going to be the case for everyone but it can help people achieve their dream.”

A ‘rainbow baby’ – is a healthy baby born after a previous miscarriage – it comes from the idea of a rainbow appearing in the sky following a storm.

Donna had four miscarriages in the space of six years and was then unable to fall pregnant again. “I had been to see my GP after my first miscarriage but was told that it was something which was pretty common,” says Donna.

“But after my fourth miscarriage I went back to the doctor because something was clearly wrong. I am someone who doesn’t dwell on things and tries to keep strong but without me realising it I had been really affected and it had put a strain on both of us.”

Donna’s GP referred her to Hinchingbrooke Hospital in 2011 and she was told to carry on trying to get pregnant for another year.

“When I went back a year later and hadn’t got pregnant I underwent a hysteroscopy to look at the inside of my womb. Everything looked normal so I was told to go away again and try for another year,” says Donna.

When Donna went back for her third hospital visit a year later and was still not pregnant, the consultant urged her to lose weight and make some serious lifestyle changes.

“I joined a slimming group and realised that it was better to eat far more regularly and that jacket potatoes and pasta were just fine,” says Donna. “I ate more than I had ever eaten before, lost weight and never felt hungry!”

A year later the results of Donna’s lifestyle changes were evident: “The consultant at the hospital was really pleased with my progress,” says Donna. “An ultrasound had also picked up that I had possible signs of polycystic ovary syndrome and I was referred for NHS-funded fertility treatment at Bourn Hall Clinic.”

Polycystic ovary syndrome (PCOS) affects between 5-10 per cent of women and is a common cause of infertility. After attending an open evening at Bourn Hall Clinic Donna and husband Chris were seen by a Bourn Hall consultant a week later and things moved very quickly after that.

Donna had to take a course of drugs to stimulate her egg production before undergoing a procedure to remove some of her eggs. These were then mixed with some of Chris’s sperm and left to develop for a few days using a process called blastocyst culture. One embryo was transferred to Donna’s womb and the couple then went home and had to wait two weeks before taking a pregnancy test.

“When I took the pregnancy test and it was positive after our first IVF attempt at Bourn Hall it felt like everything I had ever wanted,” says Donna, “but then panic set in and I worried that the pregnancy wouldn’t last.”

Donna opted to have some extra scans during her pregnancy to reassure her that the pregnancy was going to plan, including a 4D scan at 26 weeks. “The 4D scan was fantastic; we saw the baby moving around and holding his hands up to his face. He was a real baby and reality really hit,” says Donna. 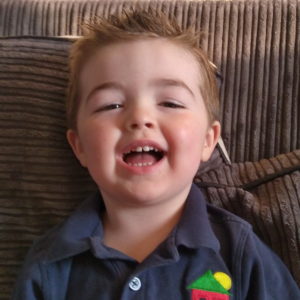 Baby Ronnie was born in December 2015 and is now a bubbly three-and-a- half- year- old who loves going to his pre-school Clarence House in Chatteris – his mum couldn’t be prouder of him: “He is a funny, loving and caring little boy who is developing extremely well for his age as well as aspiring to be a Marvel superhero,” laughs Donna. “Attending pre-school is really helping him develop further and exceed his milestones.”

Donna, aged 33, and Chris, aged 35, are enormously grateful for the NHS funding they received for their treatment at Bourn Hall.

“We often look back on our journey with Bourn Hall and are still so thankful for their support and for having our treatment funded by the NHS,” says Donna. “We feel so lucky that our treatment worked first time. Many people cannot afford the cost of having IVF privately but I would still direct people to Bourn Hall because there are a number of opportunities for reducing the cost of self-funded treatment.

“I can honestly say that Bourn Hall made our dreams come true. The staff there made us so welcome and were so wonderful, we owe them everything for the life we have now with Ronnie.”

Following the decision by Cambridgeshire and Peterborough CCG to not reinstate NHS funding for IVF in August 2019, Chris and Donna set up a petition to try to bring funding back to enable other couples to have the same chance they had – read more on The Hunts Post here.