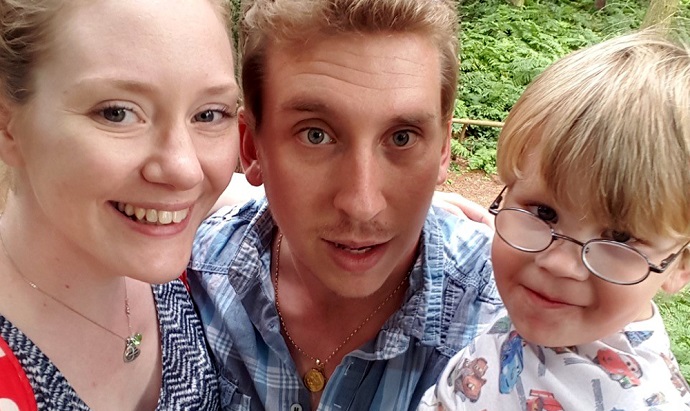 Hannah and Chris are now proud parents to Ewan, following fertility problems with PCOS and a low sperm count.

Hannah and Chris were childhood sweethearts who assumed after they got married that a family would follow shortly after, but their hopes were dashed early on.

“I had always wanted children,” says Hannah, “and assumed we would have a honeymoon baby. We started trying for a baby straight away but nothing happened.”

Eventually she went to see her GP who referred both of them for hospital tests.

“The tests revealed that I had polycystic ovaries, which came as a complete surprise as I had none of the more common symptoms,” she recalls.

Polycystic Ovary Syndrome (PCOS) is a condition that affects 5–10% of women and a common cause of infertility. It has only recently been determined that a large proportion of women with PCOS are suffering from insulin resistance. In some women, raised insulin levels have a knock-on effect on the ovaries, preventing them from releasing mature eggs, and so leading to infertility.

The couple were then dealt a further blow when tests on Chris uncovered a low sperm count caused by a childhood condition.

“We had to do some battling after that as all of the proposed treatments seemed to focus on me rather than Chris but then a different hospital consultant looked at both of our histories and took five seconds to decide that we needed IVF. It was the best day of my life,” says Hannah.

The couple were referred to Bourn Hall in Cambridgeshire, and started treatment in January 2013.

“I really thought ‘this is our year’” says Hannah, “but my first treatment failed and we had to wait a few months before trying again.”

Hannah was treated at Bourn Hall using a process called ICSI which involved directly injecting one of Chris’ sperm into one of her mature eggs before transferring it to her womb.

Second time around Hannah knew she was pregnant even before she had taken the pregnancy test.

“I just knew because I felt different,” she says. “It was amazing. The only way to describe how I felt is that before I was pregnant I felt broken and that on that day I felt as though a small piece of me was put back together. Gradually throughout my pregnancy I was pieced back together and now I am fixed!”

Baby Ewan arrived in May of this year after Hannah had a trouble-free pregnancy and Hannah and Chris cannot thank Bourn Hall enough for their treatment:

“Bourn Hall is just amazing,” says Hannah. “I don’t know if the people there realise just how appreciated they are. They are such special people. There was a nurse who held my hand when I was being treated and she really sticks in my mind, she and all her colleagues made me feel as though I was the only one who mattered.”