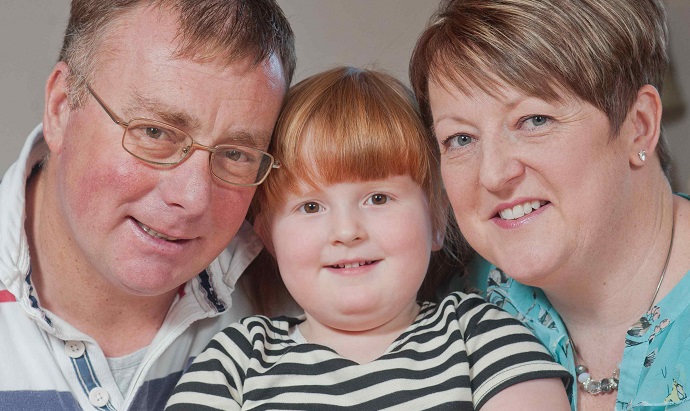 Fertility issues were not going to stop Kelly and Andy from having a family. Lucky to access further NHS funding, the couple welcomed baby Grace in 2011.

With baby Grace playing in the background Kelly (43) recalls how her own and her husband’s, Andy (46), fertility problems were not going to stop them from becoming a family.

“In 1990, we met at a carnival in Aldeburgh, Suffolk, and were married a year later. We started trying for a family soon after. To begin with we weren’t too worried about time but as the years passed we began to panic. Our initial hope of me easily becoming pregnant was soon seen as a dream and so we went to a clinic in Ipswich for investigation.

“We had endless tests and investigations and I was given the fertility drug Clomid to help improve my chances of conceiving but it didn’t work.”

The tests revealed that as well as Kelly having (PCOS), a condition that affects the way the ovaries work, Andy had a medical condition which affected his ability to produce a sperm sample, and this would require surgical sperm retrieval.

“Eventually we were told in vitro fertilisation (IVF) with Intracytoplasmic Sperm Injection (ICSI) was our only option if we wanted a baby.”

ICSI involves carefully injecting a single sperm directly into an egg in order to fertilise it. The fertilised embryo is then transferred to the woman’s womb.

Entitled to one cycle of IVF on NHS

In 2007, and living in Suffolk, the couple were entitled to one cycle of IVF on the NHS.

In January 2008, Kelly had her eggs collected. A total of seven were collected and four eggs were suitable for ICSI.

Kelly continues: “Devastatingly none of eggs fertilised. As it was our only NHS funded IVF cycle we thought our chance had passed; never again would we be able to try for a child as we simply couldn’t afford the treatment ourselves.

A gift from Andy’s parents

“Andy’s parents amazingly surprised us and generously offered to help fund our second IVF cycle. We were so grateful and with renewed hope we returned to Bourn Hall Clinic in Cambridge but this time as private patients.”

The couple started their second cycle of IVF in September 2008, but unfortunately it was not to be and the pregnancy test was negative.

“Again our hopes were dashed and we started to wonder if it would just be the pair of us forever. Then my Dad heard that the NHS funding criteria was changing and that we might be eligible for further fertility treatment.

“I was worried we might not meet the requirements as we’d already had one NHS funded treatment as well as a privately funded one but that didn’t stop us from trying.

“My Dad was fantastic; making initial phone calls of enquiry and then helping with the follow up paperwork and letter writing. Ultimately due to his hard work we were entitled to two more NHS funded cycles of IVF. This news was a big weight off our shoulders and gave us the chance of becoming parents.”

The couple started their next cycle of treatment in April 2010.

“Tragically another negative pregnancy test: we were heart-broken yet again but luckily we did have one more fresh cycle available to us. This was to be our final attempt so we were incredibly nervous.”

In late September 2010, three eggs were collected from Kelly and using frozen sperm retrieved from Andy, two embryos developed. At blastocyst stage, they were then carefully transferred into Kelly’s womb.

“I was due to take the pregnancy test on my Mum’s birthday, the 16th October, but I was too nervous, so I naughtily took it two days early. I didn’t want to spoil my Mum’s birthday if it was another negative, but, amazingly we got our first ever positive pregnancy test! It was the best news ever; I screamed with excitement yet knew we still had a long way to go until we held him or her in our arms.”

At the 20 week scan the couple discovered that they were having a girl.

“We knew this was going to be our one and only child so we wanted to be able to buy the appropriate colour clothes and nursery stuff, which is why we chose to find out the sex.”

“We thought long and hard about what we would call our miracle. We named her ‘Grace’ after the fertility goddess and for gracing us with her presence and ‘Hope’ because we never gave up!

“She completes the world for us and is everything we ever wanted. It showed us that miracles can happen.

“We know we were lucky to get further NHS funding. It made all the difference to us being able to have a family and we are eternally grateful to everyone at Bourn Hall who helped make our dreams come true.”