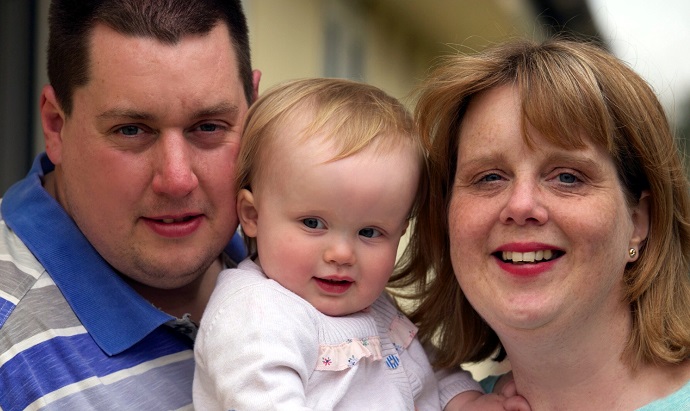 Claire was told that she had no eggs for IVF treatment. A follicle scan at Bourn Hall proved this wrong and she was soon pregnant with baby Emily.

Claire and Craig from Norwich had been told their only chance of a baby was through egg donation so they decided to attend a Bourn Hall Open Day to find out more. The consultant they saw queried the advice they had been given and this has turned their lives around.

“It broke my heart”

Claire (now 37) had been with Craig (37) for nine years before they decided to marry and start a family, after trying unsuccessfully for sometime they went for fertility testing and were referred to a specialist for NHS funded IVF treatment. This was unsuccessful and Claire was told that she had no eggs.

Claire remembers: “We were told that we would never have children unless we used donor eggs.

“It broke my heart to hear this. The only other time I had felt such pain was a few years earlier when my dad told me my mum had died.”

While considering what to do next the couple discovered that Bourn Hall Clinic had an Open Day coming up and they decided to go and find out more about egg donation.

They put their name down on the waiting list for donated eggs and prepared to go home.

They were just about to leave when they got talking with one of the consultants, who explained that Bourn Hall provided NHS as well as private funded treatment and he would be glad to have a look at their notes if the couple were happy for him to.

Claire continues: “We hadn’t realised that Bourn Hall Clinic did NHS funded treatments. We thought it was all private and so hearing we might get funded treatment we were very keen for the consultant to see our records.

“A week later we received a phone call from Bourn Hall saying they would be happy to treat us and that we were eligible for a further two NHS funded treatment cycles.”

In September 2012 the couple went along for their initial consultation at Bourn Hall’s Cambridge clinic, to discuss the options available to them.

The lone man at a fertility fair

Claire says: “The doctor gave us confidence and recommended a treatment which was very different from our previous experience. However we were very cautious as we began our agreed schedule as we couldn’t quite believe I would be able to produce my own eggs.”

Craig adds: “To maximise our chances of success and because I was concerned about Claire I did rather wrap her up in cotton wool for the first few months. We were meant to go to a fertility fair in London but because it was important for her to rest I offered to go alone and discovered myself sitting in the fertility talks as a lone man in a room of women.”

After their first IVF treatment indicated that Claire had no eggs, the couple prepared for her first follicle scan at Bourn Hall with some trepidation.

Claire continues: “We just couldn’t believe it when the nurse told us they’d found some eggs!”

On 8th November 2012 three eggs were collected from Claire, of which all three fertilised. Three days later, which happened to be Claire’s birthday, one blastocyst was transferred to her womb.

Just before Claire’s seven week scan she started to experience stomach pains and feared for the worst. She visited her GP and was told there was nothing he could do and she’d have to rest and wait.

Claire recalls: “I was a real mess in the hours before the scan. I didn’t feel pregnant and so thought I’d lost our baby.”

The couple went for their scan at Bourn Hall and were amazed when told Claire was still pregnant.

Claire says: “I couldn’t believe my ears and asked if the nurse was having a laugh. The nurse replied ‘we don’t joke about such things here’ and that’s when I began to truly believe that we might have the family we hoped for.”

“She is a treasure and means everything to us. Emily’s a delight to have around.”

Craig adds: “I believe it was fate learning about Bourn Hall’s Open Day and staying behind afterwards to talk with the doctor. Thanks to him we tried again and now have our beautiful Emily.”

Sharing her birthday with royalty

Later that same day in July it was publically announced that Prince George had been born.

“Our phone went crazy with family and friends informing us that Emily shared her birthday with royalty,” says Craig. “My mother and father-in-law were so excited. It truly made their day extra special.”

“Certainly sharing her birthday with royalty makes the date memorable and to mark the special day we got a commemorative coin, which when Emily’s a bit older we’ll give her.”

Claire adds: “Thanks to Bourn Hall Clinic the 22nd July is a very special day for us, it has made us a family and fulfilled my dream of becoming a mum.” 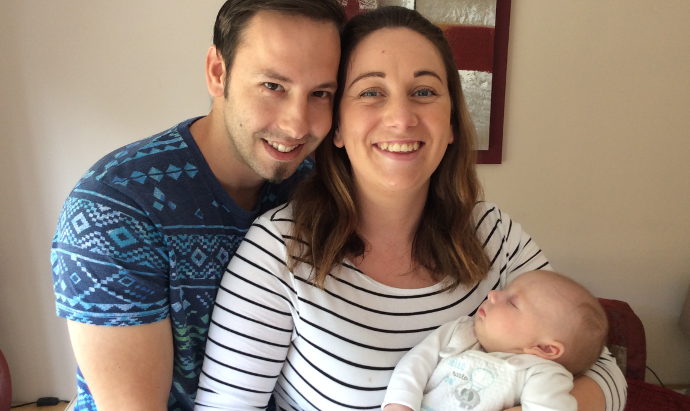 Don’t bottle up your feelings