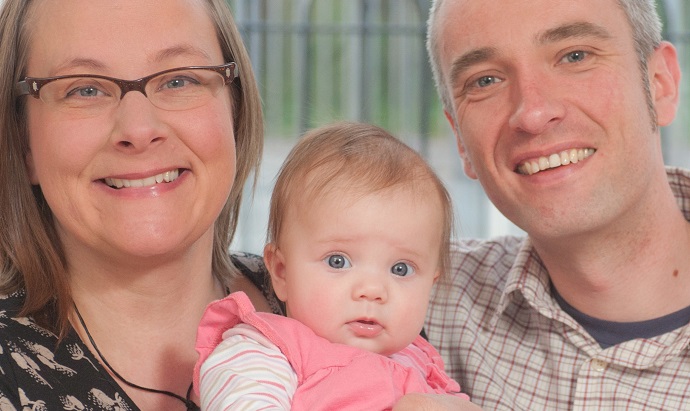 Susie faced having only one fallopian tube and endometriosis, as well difficult family circumstances. Yet she beat the odds and gave birth to baby Callie.

Susie can well remember the feelings of frustration that come when trying to conceive: “Pregnancy seemed just out of reach and every month with no success felt awful. I suffer with PMT and often convinced myself the symptoms were the early signs of pregnancy. I would dream about it, ask myself ‘is this it?’ When my period came, I would feel deflated.”

Susie, now 40, first met the man that was destined to become her husband in 2005: “Rob was a DJ in a club, we started chatting, arranged to meet again and never looked back,” she recalls with a grin.

One fallopian tube and an endometriosis diagnosis

Just four months into their relationship, Susie, a secondary school drama teacher, experienced sharp pains in her abdomen and was rushed to hospital.  During emergency surgery, it emerged she had an ectopic pregnancy; a fertilised egg had implanted into her fallopian tube and started to grow, causing bleeding and pain.

As a result, one of Susie’s fallopian tubes had to be removed.  As the tube links the ovary to the womb, it dramatically lessened her chances of conceiving without medical help. At the time, having a family was not a priority for the new couple and they decided to let nature take its course until they were ready to start trying again.

A few months later, Susie moved to live with Rob, now 40 and an insurance manager. About a year before the couple married in 2010, they began trying for a baby. After a couple of frustrating years, Susie eventually went to see her GP who referred her for further tests at the hospital.

The couple’s consultant found that, in addition to only the single fallopian tube, Susie was suffering from endometriosis. Cells from the lining of her womb where growing outside the womb causing abdominal pain and bleeding.

“I’d always thought my periods had been fairly regular but I did have the occasional heavy period which I now know was down to the endometriosis,” Susie explains.  “The doctors said it was only moderate but it was enough to be affecting my chances.

“With so many obstacles to having a baby, it would have been easy to feel down and even give up. On top of our own problems, my family was coming to terms with the loss of my 18-month old nephew Stanley to a rare heart condition. My sister Debbie and her husband Brad were devastated. We all were. It was a difficult time.

“Thankfully, Rob is a strong and steady person and he reassured me that everything would be OK.  I trusted the doctors and knew it would happen for us eventually.”

Susie and Rob were told by their consultant they were eligible for NHS-funded IVF, but Susie was at first not convinced she wanted to undergo the treatment at all.

“I didn’t have all the facts, and people were filling my head with all kinds of inaccurate information about IVF. I was also worried about telling Debbie while she was grieving for Stanley’s loss. It was Rob that persuaded me we had to try, so we attended a seminar for NHS patients at Bourn Hall’s Cambridge Clinic. We loved it there, the grounds were so peaceful and the staff just incredibly caring, so we decided to go for it.” 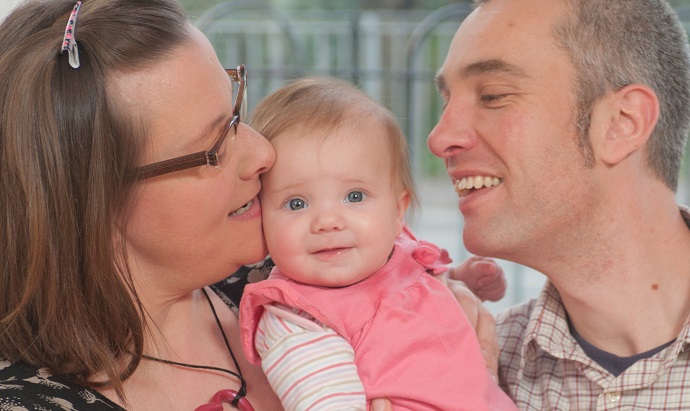 As 2013 dawned, Susie began to take fertility drugs to stimulate egg production and in February, she had several eggs collected from her ovaries to be fertilised with Rob’s sperm.  After two days developing in an incubator, an embryo was transferred into Susie’s womb and the couple waited two weeks to take a pregnancy test.

“We took the test at the start of March and I was prepared for the worst… however when it came back positive, I was amazed. My happiness was multiplied when Debbie came round two weeks later to tell us she was also pregnant… it finally felt like the bad times were over.

“I tried not to get too excited about my pregnancy, even when the early six week scan at Bourn Hall confirmed a foetal heartbeat.  I don’t think it really sunk in until 20 weeks when we found out it was a little girl,” Susie remembers.

After years of waiting, baby Callie was born on 31 October 2013, weighing 7lb 10oz. Her birth was not without complications; it was discovered that Susie had the condition placenta praevia. Her placenta had grown lower down in the womb than is usual. It was blocking her cervix, preventing a natural birth. Callie was also in breech position, meaning her feet and bottom were pointing downwards instead of her head.

“I can’t remember much about the birth,” Susie explains. “I had an emergency caesarean section and was quite weak so my midwife Elizabeth took Callie while I was being patched up. Because I couldn’t hold her, Elizabeth brought her close to my face and rubbed her tiny nose against mine. That memory means so much to me, I can’t describe it.”

Susie had to remain in hospital for eight days following surgery to correct the placental problems. She is now fighting fit and along with Rob is relishing life as a parent. Her sister Debbie also gave birth to son Gus a couple of weeks later. The family have started a fundraising campaign in memory of Stanley. It has so far raised nearly £50,000 for Great Ormond Street children’s hospital.

“I was destined to be a mother”

Susie says: “I knew in my bones I was destined to be a mother… though I didn’t anticipate quite the rollercoaster journey it would take to get there. Our families have been through a lot the past few years but now things seemed to have turned around and we couldn’t be happier.

“We were so lucky to have the funding that we got. For us, it meant the difference between having a baby and not having a baby. It is as black and white as that. Our lives would still have been full and happy, we would have come to terms with it, but I know that a little pocket of sadness would have existed in our hearts. The NHS has changed our lives by giving us Callie.

“Being a mother is like nothing I ever imagined… all the things in life you worry about, daft things, aren’t important once you have the child you’ve always wanted. I couldn’t imagine life without Callie now and this is down to the expert team at Bourn Hall Clinic.”