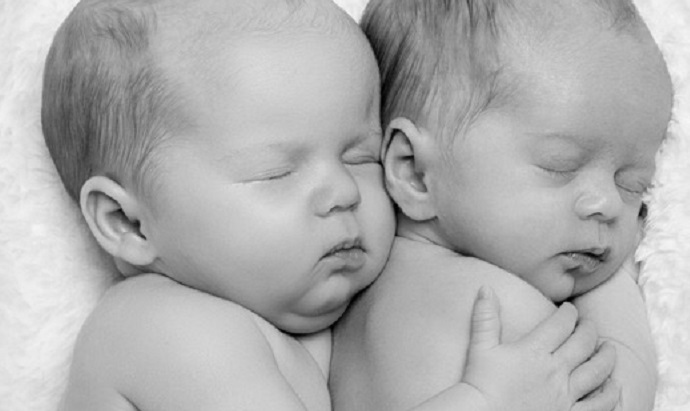 It is frustrating to experience ‘unexplained infertility’. Sarah and Richard chose IVF treatment as a result and are now proud parents to twins.

Sarah from Bedfordshire had taken more than a hundred pregnancy tests in her adult life – and all of them had come back with the same result: Negative. Then one day last year she and husband Richard were shocked when they saw something they had never seen before – a bright blue line confirming that Sarah was pregnant.

“I had never seen a positive pregnancy result before, I just couldn’t believe it!” laughs Sarah.

The pregnancy test result which Sarah and Richard had spent years hoping for followed IVF treatment at the world-famous Bourn Hall Clinic in Cambridgeshire, and there was a further surprise in store; Sarah was expecting twins.

Don’t leave it until it’s too late

Daughters Felicity and Erica were born in February of this year and Sarah, who is aged 40, has her own advice for any couple who have been trying unsuccessfully for a baby for more than two years:

“Don’t put off getting the ball rolling,” she says. “When I was in my early thirties I was pretty relaxed about starting a family but the longer you leave it the smaller the window of opportunity you have for treatment if you have problems. Don’t leave it until it’s too late.”

Sarah and Richard started trying for a baby seven years ago but after two years without success went to their GP. Tests revealed the cause was ‘unexplained infertility’.

“I now realise that this is a very common cause of infertility,” says Sarah.

The couple were eligible for fertility treatment on the NHS and opted for Bourn Hall. “We chose Bourn Hall because it got such good reviews,” she says.

“The next step was to go to a patient seminar at Bourn Hall. We were nervous but really looking forward to it. The presentation was great, taking us through exactly what would happen during our journey with them. We were quite pragmatic and matter-of-fact about it at that point, it would either work or it wouldn’t.”

Sarah did not fall pregnant at the first attempt. “I underwent three fresh cycles and one frozen,” says Sarah, “the whole process took three years because my body had to rest between treatments.

“When I took the pregnancy test and saw the blue line I just couldn’t believe it!” she says.

Finally, a seven-week scan at Bourn Hall confirmed what she had already secretly suspected, that she was expecting twins. “The pregnancy test had been instant and bright blue and apparently that is what can happen with twins because of the amount of hormones in your body,” she says.

“Richard nearly fell off his chair!” she remembers.

The couple couldn’t be happier with their new family.

“Having twins is a shock to the system, very hard work, but I wouldn’t have it any other way,” says Sarah.