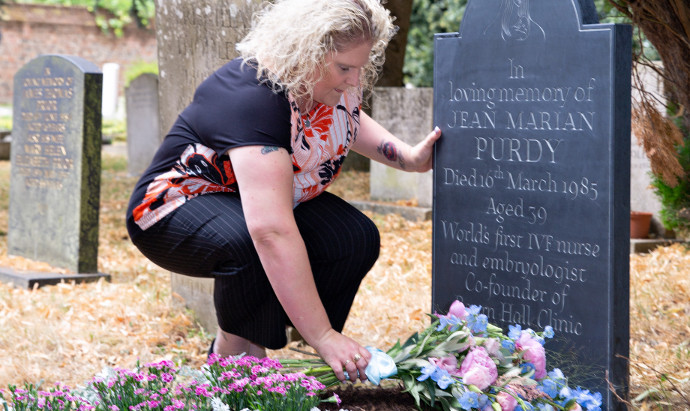 Jean Marian Purdy is almost forgotten as one of the British trio that introduced clinical IVF to the world. Working alongside physiologist Robert Edwards and gynaecologist Patrick Steptoe, Jean became the world’s first embryologist for the first-ever ‘test tube’ baby – Louise Brown, who turns 40 on 25 July this year.

Before her premature death in 1985, aged 39, Jean supported IVF treatment that resulted in over 500 babies at Bourn Hall, the world’s first IVF clinic, where, as Technical Director, she helped turn the science into a robust medical treatment.

Her great contribution to medicine has at last been recognised with a memorial service and blessing of a new headstone in the presence of Jean’s family, friends and colleagues.

Louise laid flowers on behalf of all those who have benefited from Jean’s work.

Jean was co-author on 26 academic papers about IVF between 1970-1985 including Nature and The Lancet and her contribution was recognised by fellow IVF pioneers Bob Edwards and Patrick Steptoe. At a lecture to an audience of specialists on the 20th anniversary of clinical IVF, Edwards announced, ‘There were three original pioneers in IVF not just two.’

The memorial was funded by Bourn Hall Clinic, the Association of Clinical Embryologists and the British Fertility Society along with private donations. It is located in Grantchester churchyard, where Jean and her mother are buried.

Dr Thomas Mathews was trained by Patrick Steptoe and was a colleague of Jean Purdy; he later returned to Bourn Hall to become Medical Director and has seen first-hand the impact of her work. He said: “I had the pleasure of working with Jean a couple of years after the opening of Bourn Hall. For me her greatest legacy is a living one: over 20,000 babies have been born following IVF treatment at Bourn Hall, bringing great joy to their families and friends.

“On behalf of these families and my colleagues I would be like to express my heartfelt appreciation for Jean Purdy and all she worked so hard to achieve. Thank you Jean.”