This photo was taken in October 2007 in Washington D.C. almost 3 years to the day before Robert Edwards, co-father of IVF, was awarded the Nobel Prize for medicine. That’s me on the left. This was back in the day of digital tape recorders. We chatted for 30 minutes about the work that drove his life and changed my life, and the lives of millions of others. The following recording is an edited version of that interview and was prepared specifically for Bourn Hall’s blog.

The sound quality isn’t very good so please use the transcript below.  It does give you a feel for Prof Edwards enthusiasm and passion for his work.

You can listen to the interview with Robert Edwards in this player, and read the transcript below.

If you have difficulty listening above you can download the audio clip here.

What’s your experience of having impacted so many people’s lives with the work that you’ve done?

I’ve got so much to tell. Just thinking today, tiny little things have had wonderful endings. The big things: the day we saw the first human egg mature in vitro, we threw out hats in the air.

One of us had forgotten to take the key to the gate so we climbed over the railings, and then the next day the press said there’d been a very suspicious story about us creeping about the lab at night – it’s true! They said ‘we hear you’ve been climbing over the railings; what is secret about it?’

What’s the most important thing you’ve discovered about yourself?

Being stubborn. They always say about Yorkshiremen, they’re not very intelligent but they’re bloody stubborn. I’m a classic example I would say. The IQ ticked over gently and when the chap comes to start beating me up I would smack him on the face and carry on, so it won’t stop me, and Patrick got stubborn too. We had to keep on going together. We had some very bad days in Oldham when we couldn’t get pregnancies. For three years we couldn’t get pregnancies, but I don’t think any of us faltered. Even if we knew what was going on but what couldn’t find the reason. This was an example of how being stubborn has helped. IQ helps as well of course, but it’s not everything. It’s not everything.

How often do you hear from patients?

When I was in Bourn Hall, it was embarrassing, the number who would write to me – I mean, wonderfully embarrassing. I’m very touched by the patients. My deepest sympathy is with those who failed because I know exactly what it means to them.

What does your work mean professionally?

It means a lifetime, because I’ve been fascinated by the science of reproduction and genetics for 50 or more years, ever since I left school and went to university. But I lost my two main colleagues, Patrick and Jean, at the end of 1980, and that really was a heavy blow. I decided it was time I did something else so I went back to the ESHRE (European Society of Human Reproduction and Embryology), which I’d founded, and made it stronger and started being an editor doing journals which I’m still doing today.

What do you miss most about Patrick Steptoe?

The thing about working with Steptoe is that first of all he was a damn bossy consultant. So what we had to do was to teach Patrick that we were equal, that science was now equal to medicine, if not better than medicine, because it was opening new corridors. 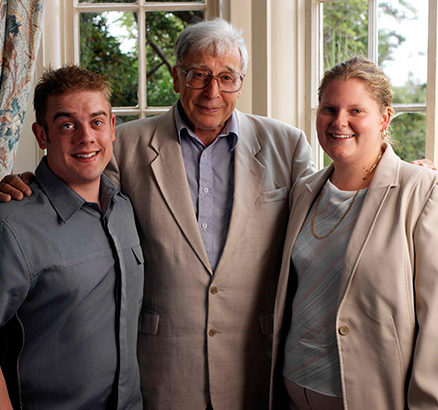