“Looking back I wish I had known earlier that I had polycystic ovary syndrome,” says Rachel Woodward from Ipswich who was unable to conceive due to a condition she knew nothing about. Polycystic Ovary Syndrome (PCOS) is one of the most common causes of infertility in women and can have a number of symptoms including irregular periods and excess facial hair.

“I definitely think there should be more information about PCOS because we only suspected I had it when my husband Arren read a magazine article describing the symptoms and we realised I had several of them,” says Rachel, aged 33.  “If we had been more aware we would have got some advice sooner than we did. More information about the mechanics of the condition would have helped me too because I like to understand how I can help myself.”

Rachel has had problems with irregular periods and facial hair since she was a teenager.  She had her testosterone levels checked out when she was younger but the results came back ‘within normal limits’ so she wasn’t given any advice at that stage about fertility – instead she was put on the pill to regulate her periods. 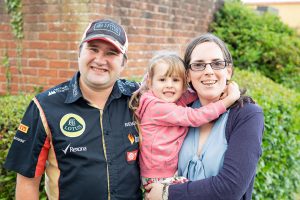 Rachel came off the pill when she was 23 – shortly before her wedding to Arren – and the couple started trying for a baby.

“When I couldn’t get pregnant I felt as though I had failed as a woman,” says Rachel ruefully.

The couple went to see their GP when they became concerned that Rachel was not getting pregnant and were told to wait a few more months before they could be sent to their local hospital for tests. They were then referred to Ipswich Hospital – and it was at this stage that for the first time Polycystic Ovary Syndrome was mentioned by a medical professional.

“Ipswich Hospital threw everything at me for my body to wake up and realise what it was supposed to be doing,” she ways. “I was put on various tablets and therapies and then I had an ovarian drilling operation.”

Despite the medication and operation Rachel still did not get pregnant and eventually the couple were told that their best hope for a baby was with IVF. They were eligible for NHS-funded IVF treatment and opted to go to Bourn Hall Clinic in Colchester.

Bourn Hall Colchester provides personalised care to both private and NHS patients. All of the appointments and treatment takes place under one roof without the need to travel elsewhere for egg collection or embryo transfer.

“Having IVF involves having to attend a lot of appointments,” says Rachel. “We did our research and were attracted to Bourn Hall because they were behind the first ever IVF clinic, it had a really good reputation and the fact they had a clinic in Colchester was really convenient for us rather than going in to London and losing half a day every time. We went along for an initial meeting and they looked at my notes and for the first time it was explained to me what PCOS actually is and what it means.” 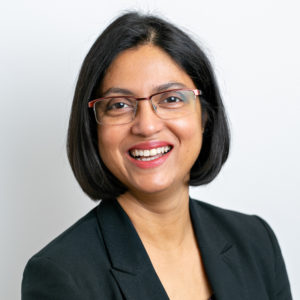 Expert in PCOS a common cause of fertility

Dr Arpita Ray is Regional Lead Clinician for Bourn Hall in Essex and an expert in PCOS. She says: “PCOS is a complex syndrome that produces a wide variety of symptoms which makes it difficult to both diagnose and treat. Patients often report having seen different specialists over a number of years for treatment for various symptoms, acne, excessive facial hair, weight gain, heavy periods, without the realisation that the problems all have the same cause.

“An example of this is that acne is treated with antibiotics, facial hair with laser treatment and menstrual disturbance with the contraceptive pill. It is only when they have tried to conceive that the PCOS has been correctly diagnosed. The problem is that if it is only diagnosed at this stage many women have an increased BMI as PCOS can cause weight gain. This makes fertility treatment less effective and pregnancy more of a problem.”

Rachel and Arren’s first two cycles of IVF treatment were unsuccessful – and so for the third Rachel was given some advice she found confronting initially.

Need to reduce BMI for fertility

“Before our third cycle it was suggested by one of Bourn Hall’s consultants that I should lose some weight,” says Rachel. “I was a little offended at first, despite being only 5’ 4” and almost 13 stone I didn’t consider myself to be overweight.  I don’t eat junk food and I am quite sporty, playing cricket in the Summer and netball in the Winter, but I swallowed my pride and took the advice on board and I lost a stone and a half on a low-carb, high fat diet in just a few months. The diet was particularly effective as PCOS is linked with insulin resistance and carbohydrates are easily broken down in to sugar. I was amazed in the change in myself, especially in my self-esteem having lost that weight, I suddenly realised how uncomfortable I had been in my own skin.”

With renewed confidence the couple embarked on their third cycle of treatment – and it worked.

“When I saw the positive pregnancy test it was the first time I had seen one and it seemed surreal,” says Rachel. “I firmly believe that the weight loss had an impact on our chances of conceiving and also the change in my mental outlook had an impact too.”

After a good pregnancy Rachel gave birth to Adele on 28 March 2015 and she says it was the most wonderful feeling when she held her daughter for the first time: “I felt whole and complete, as though that thing which had been missing was there.” 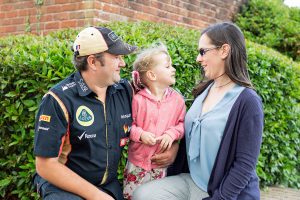 Four years later and Rachel says: “Being a parent can be frustrating, exhausting, exasperating, worrisome, but above all it is joyous, rewarding and fulfilling.

“Adele is extremely confident of her own mind and strong-willed and also extremely caring. She is super-excited about starting school and not a day goes by without her asking when she can go or talking about which friends are going to be in her class.”

The main piece of advice which Rachel would give to anyone else struggling to get pregnant is to seek expert advice early.

“Getting tested so that you know what you are dealing with is key,” she says. “The sooner you find out what the potential diagnoses are the sooner you can take action to give yourselves the best chance of conceiving naturally and, if that doesn’t work, looking at the options for specialist treatment.

Get advice and support

“Above all my advice would be to not give up. The whole thing saps your energy both emotionally and physically and I didn’t have the energy to make the effort with friends and I should have done. Get counselling, Bourn Hall has a counselling service and I was probably silly not to have it, I think it would have helped me enormously.

“The staff at Bourn Hall Clinic Colchester were just amazing, it was so convenient being able to go to a clinic a short drive from home and work. I am not sure we would have been able to go through the entire process if we had gone to a London clinic simply because of the additional time and stress it would have generated. My employers at the time were happy to work around me needing an hour off and making the time up, but for a longer trip, which might have needed 3 hours or more off at a time, especially when going in every other day in the build-up to egg collection, I would have had to take off as holiday or change my working pattern which would not have worked for me or my work.

“Bourn Hall Clinic didn’t feel like a hospital, it was so much more relaxed and personable. The people on the front desk greeted us by name and took the time to have a conversation with us. I cannot thank or praise them enough and the support and understanding the nursing staff gave us throughout was just wonderful.”

Bourn Hall also runs Fertility Awareness Events throughout the year, all around the East of England – see when the next one is happening on our Events page. 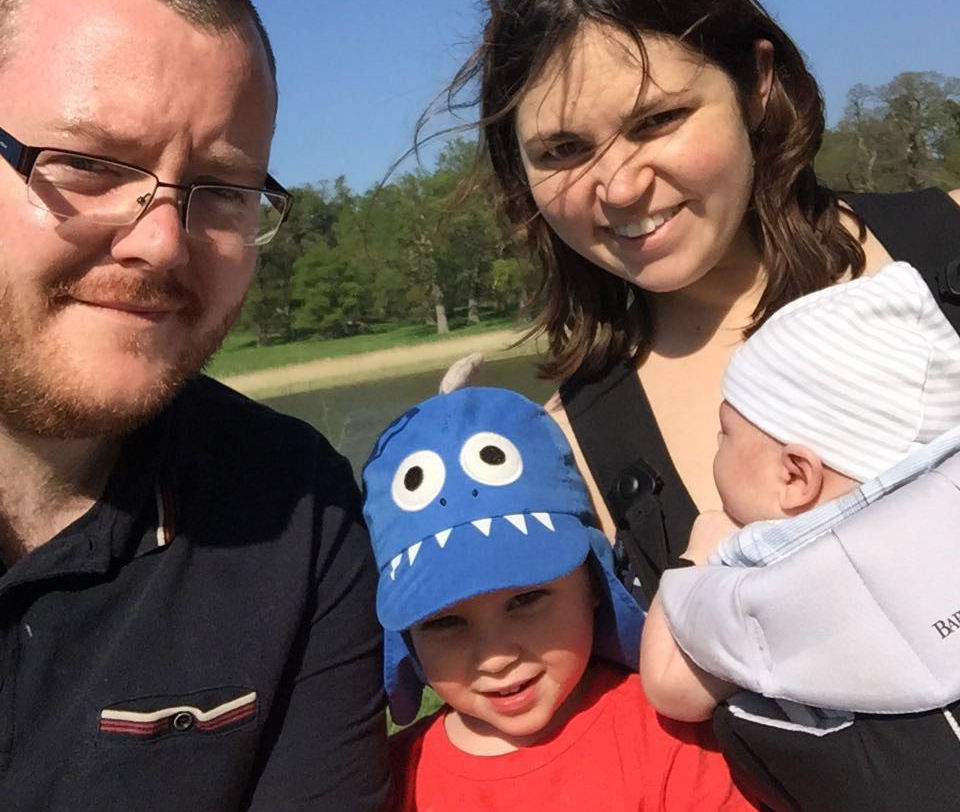 Thank you to Jamie for sharing your Bourn Hall story with us this morning.

"364 days ago was the eve of our official test date. I’m currently feeding of little boy Wilbur ❤️ My husband had stage 4 hogkinsons lymphoma 10 years ago. We froze his sperm at Bourn Hall in Cambridge in the hope we might become parents at some point. Combine that with my low AMH of 0.96 and our first cycle failed. Round 2 and I made 1 mature egg. Wilbur was a day 2 transfer. We will never be able to express how grateful we are to the team at Bourn. He’s just epic in every way 🐷"

We think baby Wilbur is epic too! ... See MoreSee Less

Our next fertility and IVF drop-in session is this Saturday from 1.30-3.30pm at our Colchester clinic. You’ll have the chance to talk to members of staff, ask questions and have a look around.

If you are thinking of coming to one of these events, please call our patient services team on 01206 844454.

Claire then went onto have three IVF daughters, successful first time for each.

After a diagnosis with cancer, John chose to freeze his sperm. Five years later, he and wife Claire started IVF treatment at Bourn Hall.
View on Facebook
·Share