After suffering crippling pain with endometriosis and two failed treatments at Cambridge IVF, Amy had a successful pregnancy with a personalised treatment plan at Bourn Hall.

Endometriosis affects around 1.5 million women in the UK and is a painful and debilitating condition which is a common cause of infertility. Amy from Ramsey in Cambridgeshire suffered with it particularly badly whilst at the same time trying to conceive with husband James. Eventually surgery and IVF treatment enabled the couple to have children together.

“I came off the contraceptive pill when I was in my late twenties so that we could try for a baby,” says Amy, aged 35. “I already had a daughter from a previous relationship so I hadn’t anticipated for one minute that we would struggle to conceive.”

After a couple of years of trying to get pregnant Amy noticed that she was starting to experience crippling pain at certain times of the month.

“It literally felt as though I was being stabbed in the stomach,” she says. “I was hospitalised twice and initially the doctors thought I might have appendicitis or an ectopic pregnancy.”

Fertility testing proved inconclusive and Amy still didn’t have a diagnosis for her pain.

“I was told it might be irritable bowel syndrome so we kicked up a bit of a fuss because it was so bad I would faint and just need to lie on the settee. James was having to take time off work to look after me,” she says.

Finally Amy got a definitive diagnosis of endometriosis, a common cause of infertility, following an exploratory operation.

After being advised that their best chance of a pregnancy was having IVF the couple initially went to Cambridge IVF but sadly after two rounds they were unsuccessful.

“We were devastated after our second treatment hadn’t worked and we thought, what are we going to do?” says Amy. “The treatment had taken its toll on my body and I felt really drained and my hair had started to fall out.”

“Finding out that Bourn Hall Clinic was so close to us we decided that we wanted to give it a try because we wanted to ensure that we had tried everything before we gave up.

“As soon as we walked through the door at Bourn Hall we felt relaxed, the building feels quite homely, not at all like a hospital. It was lovely and quiet and we felt really happy with our decision to go there.”

Amy and James were given a personal treatment plan.

“With our two IVF previous treatments I had started bleeding a few days after embryo transfer,” says Amy. “At Bourn Hall our treatment was adjusted for us and I was given a low dose of aspirin and blood thinning injections as well as an endometrial scratch.”

Endometrial scratching is a relatively simple procedure which makes a small scratch in the lining of the uterus to improve the implantation rate when embryos are transferred to the uterus. Although there is little scientific evidence to support this technique many clinicians have observed improved implantation rates.

Another difference in the couple’s third treatment was that Bourn Hall transferred blastocyst embryos after five days developing in the embryology laboratory instead of the three day transfer they had at their previous clinic.

Two weeks after embryo transfer and the day before Amy’s 35th birthday she took a pregnancy test. “The test was positive but I felt deflated and couldn’t trust it because of my two previous bleeds,” she says. “I didn’t want to get too excited and be let down again.”

Thankfully this time Amy’s pregnancy was viable – but the couple had a very big surprise in store.

At the couple’s six-week scan at Bourn Hall they found out that not only had both embryos taken but one of them had divided and that Amy was expecting triplets – a singleton and identical twins.

“It is just one of those things that you don’t expect to hear when you go for a scan,” says Amy.

“I don’t think we spoke all the way home in the car we were in complete shock! I was thinking ‘oh my god what am I going to do, where are they going to go? My house isn’t big enough, my car isn’t big enough but then I slept on it and thought ‘it is going to be okay, our house is big enough we just need to get a new car, it will be fine!’”

On 15 June 2018 Amy gave birth to her three baby girls: Roni and Lola who are identical and their sister Isla.

Life now is “hectic” laughs Amy but she wouldn’t change it for the world.

Work as a tag team

“James has taken a year off work to help me and we work as a ‘tag team’,” she says. “He wants to enjoy it as the girls were a long time coming and he wanted to take time out and help me with the three of them. The girls are pretty good sleepers and we take it in turns to get up early with them.”

As for Bourn Hall, Amy says: “We are just so grateful. The staff were all so lovely, every step of the way, and we are so glad that we went there for our last try, not just because we got our three babies but because it was such a nice place to go.” 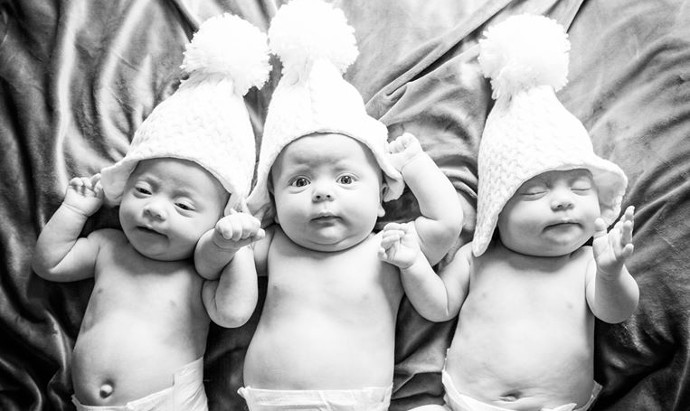 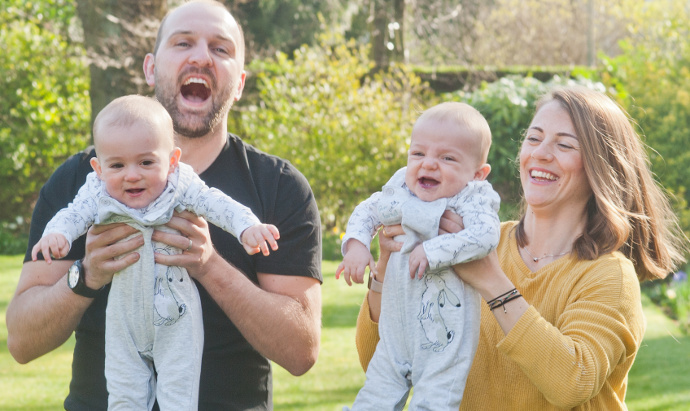