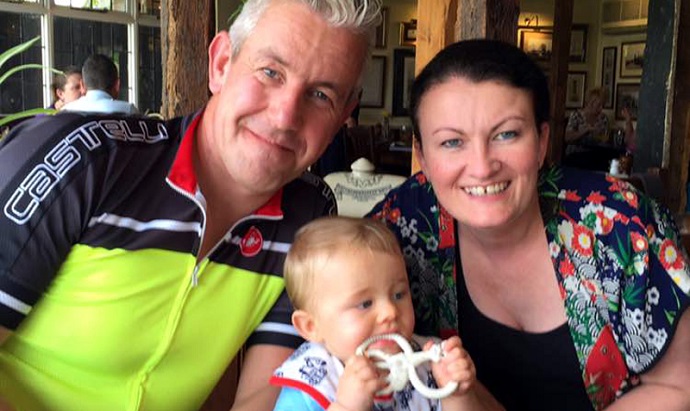 Diagnosis of low sperm count was a wake-up call for Jo and Ben, encouraging the couple to get fit for fertility. They lost weight, improved their health and overcame disaster to strike lucky on their third attempt at IVF.

As Chelmsford mum Jo proudly wraps her arms around her one-year-old son Alfie, she says with utter conviction: “he is the most amazing thing in the world.”

Alfie’s arrival last year marked the end of a long wait for Jo and husband Ben, who had been trying unsuccessfully for a baby for six years before deciding to seek help. “We just assumed, perhaps rather naively, that one day I would fall pregnant,” says Jo, now aged 40,”but we got to the point when we realised that we needed to talk to someone.”

On average 80% of couples will get pregnant within a year if they have sexual intercourse every two to three days and do not use contraception, so couples that are unsuccessful after two years should seek help.

The couple went to see their GP, who referred them for tests. Jo says: “Ben was told that he had a low sperm count and slow sperm motility which was quite hard for him to accept at the time, but at least we had a reason.

“I wasn’t getting any younger and most of my friends had already had children and that was really difficult.”

Lifestyle changes to get fit for fertility

The couple were referred for fertility treatment and were also advised to make a few lifestyle changes. Ben took up mountain biking and lost an impressive four stone leading up to their treatment at Bourn Hall Clinic whilst Jo took up running and lost a stone.

“I wasn’t classed as overweight but everything I had read about increasing our chances of having a baby pointed to having a healthier lifestyle,” says Jo. “When Ben was told about his low sperm count he thought ‘what I can do to improve that?’ He wasn’t obese but he was carrying a bit of extra weight. We had been given a real wake-up call that we needed to help our situation. We were just so desperate to have a family we wanted to do everything we possibly could.”

Ben’s weight loss produced tangible results, reveals Jo. “Every time Ben went back for tests while he was losing weight the volume and quality of his sperm increased, so it definitely made a difference.”

The couple were treated at Bourn Hall Clinic using a process called ICSI which involved removing some of Jo’s eggs and directly injecting each of them with one of Ben’s sperm to help fertilisation occur. One embryo was then transferred to Jo’s womb.

Her first two cycles of treatment did not work and the third cycle of treatment was nearly put in jeopardy when Ben had a mountain bike accident and ended up in hospital. Luckily he was let out in time for treatment to go ahead as planned.

“We knew that the third cycle was our last attempt,” says Jo, who works as a hairdresser, “but I was so worried about Ben having fallen off his bike I think it helped to take my mind off worrying about whether the treatment would work. The whole process had become all-consuming, we were so desperate for a child. Both of us are only children and any baby would the first grandchild in the family.”

It was definitely third time lucky for the couple because two weeks later they found out that Jo was pregnant. “I kept staring at the blue line on the pregnancy test,” Jo remembers. “I couldn’t believe it!”

After a trouble-free pregnancy (“I loved every minute” says Jo), baby Alfie finally arrived in August 2015 and Jo says that she felt a complete sense of elation – “I have never cried so much in my life!” A year on and Alfie is a happy-go-lucky toddler who is doted on completely by his besotted parents and grandparents.

Ben says: “I can honestly say that this journey was a roller coaster of emotions from start to finish. However with every effort we made and never giving up hope we couldn’t have wished for a more wonderful outcome.

“Alfie is our pride and joy and I am absolutely besotted by him. I still stare at him and cannot believe he is here sometimes.”

Jo’s advice to anyone worried about their own fertility is to not delay seeking help.

“Go and see your GP,” she says. “We left it a long time before going to our doctor and we could have been helped earlier if we had sought help sooner.

“Most of my friends’ children are at primary and secondary school; I don’t have any close friends with children Alfie’s age. If you get a fertility test then at least you know if there is an issue.

“Bourn Hall Clinic was absolutely incredible; having Alfie is the most amazing thing I have ever done.”