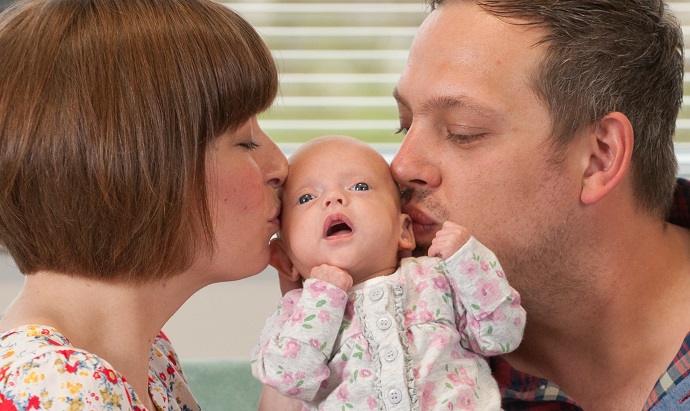 Sian and Ryan received IVF treatment at the new Bourn Hall Clinic in Wymondham and welcomed baby Yvie after years of infertility.

Sian and Ryan were the first patients to become parents following IVF treatment at the Bourn Hall Wymondham clinic as their baby daughter Yvie came early. Sian is delighted to be a mum: “Having her home from hospital is brilliant – I can now cuddle her when I want. We feel like she’s finally ours after all those years of waiting.”

The couple first met in 2002 and Ryan says: “We’d always wanted to have children – but we wanted to get married first and for Sian to achieve her qualifications for her career.  We thought we were doing things the right way and you just don’t think you’re going to have problems.  We got married in July 2008 and we’re hoping to start a family straight away.”

After a year without success they went to their GP for advice.

Both Ryan, a pipe fitter for an oil and gas company and Sian, who works in human resources have demanding jobs.

Ryan continues: “We were given advice to make some lifestyle changes… including exercise and diet and to try and minimise stress, which was difficult in our jobs.  But the most stressful part was not knowing why we were having problems conceiving.”

Sian agrees: “We both felt under pressure; although we didn’t talk about it openly we were both worried it could be our fault.”

In the end it took more than five years before they had the cause of their infertility properly investigated. They were then referred for IVF treatment.

At the James Paget hospital, Sian underwent a “lap and dye” test; also know as a laparoscopic tubal patency test, to see if her fallopian tubes were blocked.  The results confirmed that Sian had endometriosis, a condition where endometrial tissue, which is normally found within the uterus, grows outside of the womb and is found in abnormal sites such as the ovaries and fallopian tubes. It was also the cause of the couple’s infertility.

Sian explains: “The diagnosis explained why I had suffered with such painful menstrual cycles which over the years were becoming increasingly worse.

“Our consultant said I would probably end up with a significant amount of scar tissue if the endometriosis was removed, potentially causing more harm than good, so it was decided not to operate before IVF treatment.”

Ironically, the best treatment for endometriosis is often pregnancy.

The couple were referred to Bourn Hall. Sian phoned the clinic and managed to get an appointment really quickly.

“IVF treatment is more common than you think”

IVF treatment involves stimulating the ovaries to increase egg production and these eggs are then collected to be fertilised with sperm.  Sian and Ryan were among the first to have egg collection at Wymondham in June 2013.  Their embryos developed in the laboratory for five days until they reached blastocyst stage.

The embryologist explains that three out of the four embryos were top grade:  “Yvie was a ‘hatching blastocyst’. We don’t see them very often as embryos don’t normally ‘hatch’ until they implant in the lining of the uterus.”

After two weeks it is normal to do a home pregnancy test followed by a confirmation a few weeks later. Sian could not wait and did the pregnancy test a few days early. She did it secretly before showing Ryan the results!

Sian recalls: “As much as we said we’d initially keep it to ourselves, we were so delighted we told our parents, my sister Amy and other family members.  We had kept the treatment fairly quiet, although some of my close work colleagues knew.  It wasn’t that we were embarrassed about having IVF treatment… once the results were in, we happily discussed it with others.

“I found the more I spoke to people about it – the more people opened up about their own experiences.  It was surprising how many other people had had help with fertility, including IVF.  It’s more common than you think.”

Sian says that being able to have her treatment at Wymondham inevitably took some stress out of the appointments: “Coming to Bourn Hall we felt we had made it. We had utmost confidence in the staff. They are professional and caring and we felt in expert hands.

“At one point I was being monitored every other day. Travelling to Cambridge would have meant a three hour round trip and would have been very difficult juggling this with work.  I can’t say enough what an amazing service we had at Bourn Hall Clinic in Wymondham.”

Although the pregnancy was good to start off, Sian had the first indications of a problem at about 10 weeks when she began to bleed and went to A&E.

Although a scan revealed that the baby was fine, it was a very emotional and stressful time as Sian remembers: “We were very anxious and tried hard to balance taking care of myself with maintaining normal life, including work.

“My employers had been very understanding but I had felt that by missing work others were picking up my work load which was unfair at such a busy time.  After several other bleeds, and a pep talk from my midwife, I realised I had to focus on being an expectant mother and took the decision to take better care of myself.”

At the 20-week scan, the doctors discovered Sian had placenta praevia. This is a condition where the placenta grows low in the womb – blocking the cervix and causing bleeding. It affects around one in 200 pregnancies in the UK and it can happen in any pregnancy. It cannot be predicted and it is not associated with other conditions such as endometriosis.

Unfortunately Sian had a further bleed at 24 weeks. The condition began to create concerns: “As the baby was growing, the placenta was stretching, causing further bleeds.”

Every additional week was a bonus. On the fifth bleed and admission to hospital, the Chases went for a tour of the Norfolk and Norwich Hospital, which has special facilities for premature babies. “We were in denial and were sure we were going to get past 30 weeks but it didn’t happen.”

Yvie was born at 29 weeks at the Norfolk and Norwich Hospital on the 1 January 2014. She came home eight weeks later after receiving care at the James Paget neonatal unit. The couple are delighted that they have finally achieved their dream of having a family. 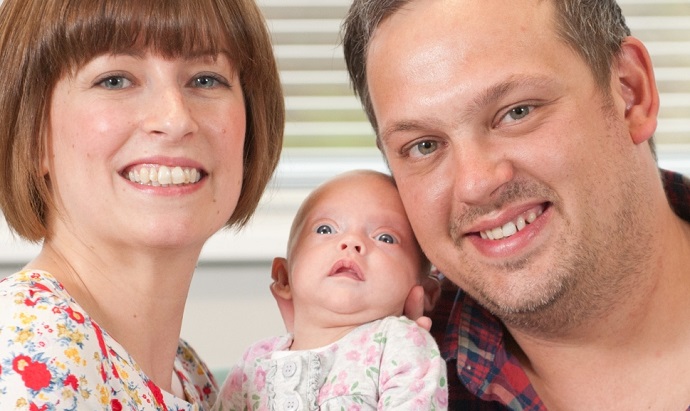 Ryan says: “We are so indebted to the team at the Bourn Hall Clinic who have changed our lives.  Our advice to others is not to put it off. The most difficult part was enduring the initial screening process through the GP. Once that was out of the way and we were referred for IVF, it became less daunting.

“It is not straightforward but also not as bad as you think. We now have a beautiful daughter which makes the hardship and trauma that we have gone through seem insignificant and a distant memory.”