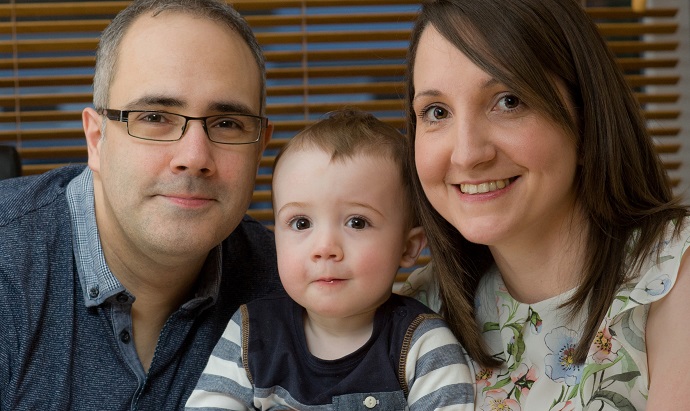 Emma (33) delightedly texts her husband Wayne (33) that their four month old son, Jake, has laughed for the first time. When they began trying for a baby back in 2010 this milestone was incomprehensible to them.

Emma begins: “Wayne and I have known each other since the age of five, when we started school together, but it wasn’t until we were 17 that we became a couple and then finally in 2009 we decided to tie the knot and think seriously about starting a family.

“For over three years we were on tenterhooks: every month hoping that the next month I would conceive. It was devastating not getting pregnant, especially when everyone around us seemed to be conceiving so easily.”

In May 2013 the couple went to see their GP and were referred for fertility tests. The results showed that Wayne had abnormally shaped sperm. They were informed that this could possibly be affecting their chances and so their consultant referred them to Bourn Hall Clinic. As the couple lived in Essex, they attended the satellite clinic in Wickford.

Emma says: “In advance of our initial consultation I was apprehensive at the prospect of IVF and imagined it being very invasive, even aggressive, but the Bourn Hall staff put us at ease. 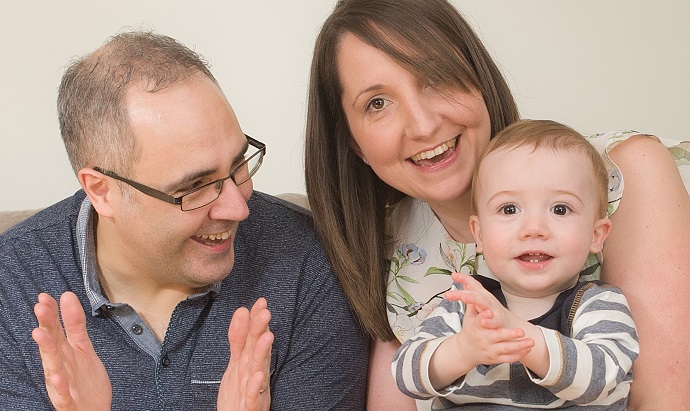 “The consultant we saw was very positive and despite our fertility test results thought we had a good chance of success with IVF.”

Wayne adds: “I have always wanted to be a dad, looking forward to when we had our own little family. So when we were told we had to go for fertility treatment it was a lot to take in. I was of course worried about what lay ahead for Emma and I, not really knowing what to expect. But once we had gone for our first consultation there seemed to be hope.”

Taking it one step at a time

The couple began their NHS funded treatment cycle in January 2014.

Wayne says: “All the way through the IVF treatment the staff at Bourn Hall were professional and friendly. They explained each stage of the process which helped ease my fears. I felt the best way to go through the process was to take each stage one at a time. I never wanted to look too far ahead in case things didn’t work out. I guess it was my way of coping.”

Seven eggs were collected from Emma and six were successfully fertilised by Intracytoplasmic Sperm Injection (ICSI). All of the six embryos made it to day five blastocysts, of which one was transferred into Emma’s womb and another was suitable to be frozen.

Emma adds: “We took each step at a time; never quite daring to believe that I might become pregnant and ultimately us having a family.”

“We are so lucky to have Jake”

Emma enthuses: “He’s a wonderfully cheeky chappy, who’s very alert and loves to chat. We are so lucky to have him that it is beyond words.”

Wayne adds: “I have waited a long time to become a dad, and now it has finally happened I couldn’t be happier.  Sometimes it can be challenging but just seeing my little boy happy and smiling makes it all worthwhile. I love spending time all together as a family. I am looking to the future and all the adventures it will bring.

“I cannot thank Bourn Hall enough, without all their knowledge and hard work we may not have our little family.”

Emma concludes: “And certainly if we do decide to have any more children we would return to Bourn Hall Clinic as the staff have been so supportive and reassuring.

“Any early fears about IVF have long gone and we would wholeheartedly encourage other couples that find themselves in our predicament to have hope and visit Bourn Hall.”