Having met the love of her life Emma thought ‘being together was enough’ but deep down she wanted to be pregnant and have a child of her own.

Emma was 22 when she met Sean, who was in his early forties; they soon realised they wanted to spend the rest of their lives together and Emma knew from the outset that this probably wouldn’t include children.

“From the moment I met Sean I was head over heels in love but as he had children from a previous relationship, and a vasectomy, I was happy with things as they were.

“However later on my Mum died. In her dying days we’d discussed children and I then realised how much I wanted a child myself and found I couldn’t suppress my feelings anymore.

“Sean and I discussed it and as he had had a vasectomy we considered IVF using donor sperm.” 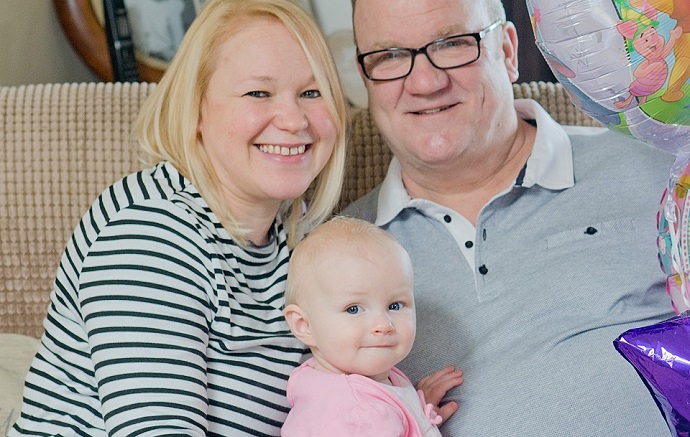 A visit to the Cambridge Clinic

As Sean already had children the couple weren’t eligible for NHS-funded treatment. Knowing of Bourn Hall the couple decided to visit the Cambridge Clinic to learn more about their options.

“When we were there we learnt about the egg sharing programme, which seemed ideal for us. It would help cover the cost of our treatment and help someone else, like the sperm donor was doing for us.”

To donate eggs or sperm you need a health check and tests revealed Emma was a carrier of the Cystic Fibrosis gene and so unable to share her eggs.

“It was devastating to find we couldn’t continue with the egg sharing programme.  This information was a shock too so we decided to take some time to reflect.

“This was a very difficult time for me. Wherever I looked there seemed to be mums or pregnant women. If anyone asked me about having babies I’d just reply ‘being together was enough’ but inside I was in a state.

“Sean even suggested I leave him and find someone else who could make me a Mum but that was beyond my comprehension. Yes I wanted a child but with him as the Dad.”

Sean began researching into other options for them, such as adoption or vasectomy reversal, which seemed an option. Sean found a well-respected surgeon in the Midlands and booked an operation. However, during the procedure Sean’s heartbeat fell dramatically.  The surgeon was concerned and cancelled the operation.

“It was a very worrying time,” recalls Emma. “Thankfully Sean turned out to be alright but our trip had been wasted. The surgeon did say that from his examination of Sean it looked hopeful so we were optimistic and started saving again.

“We never told our families in case they worried and we found out afterwards that they thought we were going away on lovely holidays!”

Unfortunately the second attempt of a reversal was also unsuccessful.

“It was devastating. Sean was left in pain from the operation and it had all been for nothing.”

Again Sean suggested Emma leave him but she refused believing that somehow they could have a family together.

Sean makes a change of plan

Sean says: “It really hit us hard the second vasectomy reversal failing. We were so sure it was going to work. We both agreed to have a holiday and Cuba was the intended destination. In the meantime Emma was working hard at our fruit shop and everything appeared to be back to normal, but I knew she wasn’t happy.

“One day when I was at home looking online at holidays, I just knew it wasn’t right to spend our savings going abroad. Although I was older and have children I wanted her to have a chance.

“Emma was born to be a mum!

“So I got every bit of money we had, put it in an envelope and gave it to Emma – it was all we had in the world. I thought let’s have a go at IVF. Then we would know we had explored every avenue and tried everything.”

The couple decided to go back to Bourn Hall to discuss IVF, and by now the Wymondham Clinic had opened.

Emma says: “We saw an amazing consultant who discussed all our options and what would give us the best chance of success. We agreed to try using donor sperm for IVF treatment.”

All Bourn Hall patients are offered complementary counselling but for those involved in the donation programmes it is a requirement.

“This was helpful to confirm we had made the right choice and to address questions that we might have later on.”

For the couple it was important they had a good match to Sean, which is done by completing a form with the desired characteristics. The donor also provides an anonymous pen picture and a message for any future children resulting from the treatment.

In May, following egg collection, seven of Emma’s eggs were fertilised using the donor sperm.

“We got the call from Bourn Hall to come in for embryo transfer and only one embryo had survived. I was so sure it wouldn’t work. I lay on the medical table crying. One of the nurses came over, held my hand and reassured me that one embryo was all that was needed for a baby.

“Unbelievably it worked! Of all the routine scans, seeing my baby in the eight week scan was the best day of my life. Couldn’t believe I was pregnant and there was my baby inside.”

“Kathleen is amazing!” says Emma. “She completes us.”

Sean agrees: “Our world is complete.

“I believe every woman – if she wants to – deserves the chance to be a mum. Emma only had one embryo but what a beautiful embryo it was!”

Emma continues: “Throughout our treatment at the Wymondham Clinic the staff were brilliant.So welcoming and you felt as if they gave a bit of themselves. We are a strong couple and love each other very much but Bourn Hall and the nurses made it possible, helping us through the ‘down’ days.”

Emma admits that when she wrote invites for Kathleen’s first birthday party she had tears rolling down her cheeks: “I’ve waited all my life for Kathleen and certainly doubted if this moment would arrive.

“Sean and I will be celebrating Kathleen’s first birthday with family and friends and most certainly having a cake.”

When Charlotte fell in love with bus driver Ian nearly ten years ago, he explained that as he had already had a vasectomy she might have to choose between him and having children.

“Ian carries a rare gene and had the vasectomy for medical reasons,” explains Charlotte, from Ipswich. “He already had three children and two have severe special needs. “I was 26 when I met him and I had always wanted to have children. When he explained the situation I just thought he was so wonderful that I would accept that by being with him I may never have a child of my own.”

The couple met when Charlotte got on Ian’s bus every day to go to work. “We had a mutual friend who gave me his phone number,” she laughs. “I invited him out for a drink and the rest is history!”

They got married, but as Charlotte reached her thirties she began to think again about starting a family.

“I asked Ian what he thought about the idea of fertility treatment using a sperm donor and he was completely behind the idea,” says Charlotte.

“We were not entitled to treatment on the NHS but my parents offered to pay for it so we got things moving very quickly. Bourn Hall had been recommended to us by a colleague of my mum’s so we went along for an appointment.”

First Charlotte had a Fertility Check which included a HyCoSy (a tubal patency test using an ultrasound dye). Her tests came back clear, so initially Bourn Hall treated Charlotte using donor sperm with a procedure called IUI (intra-uterine insemination). This is a less invasive treatment for patients than IVF.

Unfortunately Charlotte did not fall pregnant after the IUI so the second attempt was by IVF. This requires medication to control the cycle and stimulate the ovaries. Disappointingly, she ovulated too early and there were no eggs available for treatment.

The third time, Charlotte and Ian went to Skegness for a holiday while she was going through treatment, and travelled to Bourn Hall’s Cambridge Clinic every other day for check-ups. She thinks this helped her to relax as this time she produced four eggs. These were fertilised using ICSI, where a single sperm is injected into the egg, resulting in two embryos that were transferred to her womb.

“The day before I took the 14-day pregnancy test my breasts started to feel swollen but I didn’t want to get my hopes up. On test day I did the Bourn Hall pregnancy test and also one I had bought from the chemist and then handed one of them to Ian so we could watch them at the same time. When they both showed up positive we were absolutely stunned!”

The couple had another pleasant surprise when they went to Bourn Hall for a seven-week scan and were told that they were expecting twins.

“We had been hoping for twins,” reveals Charlotte, “so we were really pleased. Ian started crying when the nurse broke the news to us; it was lovely.”

After a smooth pregnancy Charlotte gave birth to Hattie and Anthony in January 2016 and has found looking after two babies much easier than she thought it would be. “They are such relaxed babies,” she says. “We have got into a really good routine with them – they are just a joy.”

Charlotte, now aged 35, and Ian, aged 50, cannot thank their anonymous sperm donor enough: “We are both huge advocates of sperm donation,” she says, “and really want to promote it.

“I would like to reassure anyone thinking of using a donor that they shouldn’t feel uncomfortable about it or worry that they might feel differently towards their children. “My husband is 100 per cent the twins’ dad and it is wonderful. He is not remotely bothered that we used a sperm donor. People even comment on how much Hattie looks like Ian!”

The couple have nothing but praise for Bourn Hall Clinic and even gave their children middle names after two specialists who treated them.

Named after consultants that brought hope