Throughout her teenage years and twenties Shanna was blighted by excruciatingly painful periods – needing regular surgery to rectify the damage wreaked by endometriosis and ovarian cysts. “It got so bad that I was offered a hysterectomy when I was 21,” she says. “But I had always known that I wanted children and I remember saying ‘absolutely no way.’

It was a hard decision because I was miserable and constantly in pain but I wanted to be a mum and decided I would have to deal with the pain to get what I wanted.”

Endometriosis is a debilitating gynaecological condition affecting around one in ten women in the UK and can damage the reproductive organs, as tissue similar to that lining the womb starts to grow around the ovaries and fallopian tubes. Symptoms include: painful, heavy or irregular periods; pain during or after sex; painful bowel movements; fatigue; and infertility. More than half of sufferers will have been to A&E with excruciating pain.

“After one of my operations the doctors said that it looked as though someone had poured a load of concrete down there,” says Shanna who lives in Essex.

“I had first been to see a gynaecologist when I was 13 but my endometriosis wasn’t actually diagnosed until I was 21 after an operation to remove an ovarian cyst. I had a number of operations, averaging around one a year, to remove scar tissue and I was in such terrible pain all the time. I was regularly in A&E screaming with pain and had to wear morphine patches.

“I knew if I wanted to have children,  I would need IVF as both of my fallopian tubes were blocked. The doctors had basically told me that the next time they operated on me they would have to remove everything.”

In 2014 Shanna married Dean and the couple decided to try to complete their family with treatment at Bourn Hall Wickford.

“I had successful IVF treatment in London with my previous partner, but we opted to go to Bourn Hall as it was closer to home and felt more convenient,” she says.

Shanna and Dean had their treatment shortly before Bourn Hall opened its state-of-the-art Wickford clinic and so split their treatment between the Wickford satellite clinic which existed at the time and the Colchester clinic where she had her egg collections and embryo transfers. “I just missed out on being treated at the new clinic,” she laughs.

“When we arrived at Bourn Hall I was 33. I didn’t feel that old but became aware that I was a bit older ‘in egg years’ than when I had my first treatment and that might affect my chances.”

By an amazing coincidence, as Shanna walked in the door she was recognised by Bourn Hall Fertility Nurse Angela who had previously worked at the London clinic where Shanna had her first treatment.

“The nurses at Bourn Hall were fantastic, they were always so kind and answered all my emails, nothing was too much trouble,” says Shanna.

Sadly, the  couple’s first IVF cycle was unsuccessful but, undeterred, Shanna was keen to embark on a further round as soon as she and Dean were able.

“It was hard when I didn’t get pregnant, in fact my period came on my birthday,” she says. “Also I found it difficult because I knew that my body could do it because I had succeeded in having my son, Henry, but equally already having a child gave me comfort and made me feel lucky and grateful.

“My son was involved every step of the way with my treatment for a little brother or sister and used to watch me doing my injections and I used to tell him that it was to ‘help mummy’s eggs work’. When my first treatment didn’t work I explained to him that ‘mummy’s eggs hadn’t hatched,’ it was the only way I could think of to explain it to him.”

Shanna and Dean’s second cycle of treatment at Bourn Hall was successful and on 26 January 2018 they welcomed daughter Arabella. “I felt a rush of love for her straightaway,” says Shanna.

Shanna doesn’t regret her choice between hysterectomy or motherhood.

“When I found out I was having a daughter I did worry a bit that she might develop endometriosis when she is older, as it can be hereditary, but hopefully things might have moved on in a few years in terms of treatment. And at least if she experiences symptoms when she is a teenager I will know what it is and we won’t have to wait seven years for a diagnosis like I had to.”

Katherine and Daniel from Essex are delighted to have twins George and Thomas. 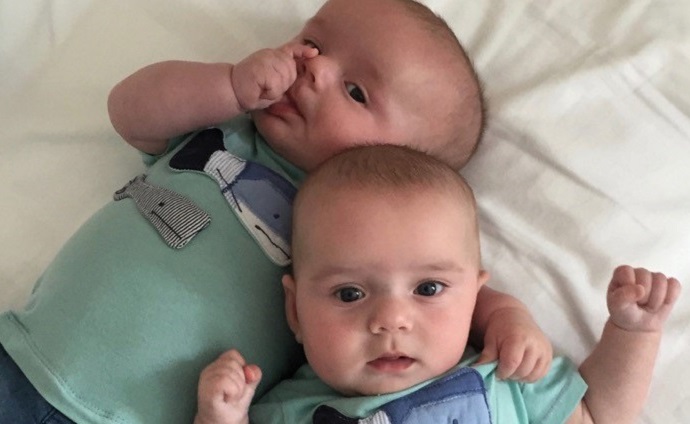 The couple first started trying for a baby in 2011 but when Katherine hadn’t conceived after more than a year they went to see their GP. “The doctor put me on Clomid and when I still didn’t fall pregnant we were sent to our local hospital for tests,” reveals Katherine.

A dye test showed that one of Katherine’s fallopian tubes was blocked. “It was actually a relief to begiven a reason why I wasn’t getting pregnant,” says Katherine. “I hadn’t had any symptoms and we led a pretty healthy lifestyle so I had no idea what the problem was.”

Katherine and Daniel were told that they could be referred for IVF treatment and they opted to go to Bourn Hall Clinic.

Over the next couple of years Katherine sadly had three miscarriages, twice following IVF treatment and once after a surprise natural conception but despite their setbacks Katherine says that she and Daniel did not give up on their dream of having a family.

“I changed my hours to part-time at work to reduce my stress levels,” says Katherine, who is a PE teacher, “and we went back to Bourn Hall for further treatment using two frozen embryos from previous treatment”.

This time around the couple also had intralipids, which is a source of fat and energy normally injected. It is thought that intralipid is able to change the immune cells in the uterine lining, making the environment in the uterus friendlier towards the embryo.

The couple were ‘cautiously optimistic’ when Katherine fell pregnant for a fourth time but tried not to get their hopes up too much because of the previous miscarriages. Happily the pregnancy went full-term and George and Thomas arrived on 27 March 2016.

“Since the boys have arrived it has been a whirlwind,” laughs Katherine. “We have had lots of support from our parents and we have to be very organised but I can honestly say that it has been worth it. We are loving every minute of it.” 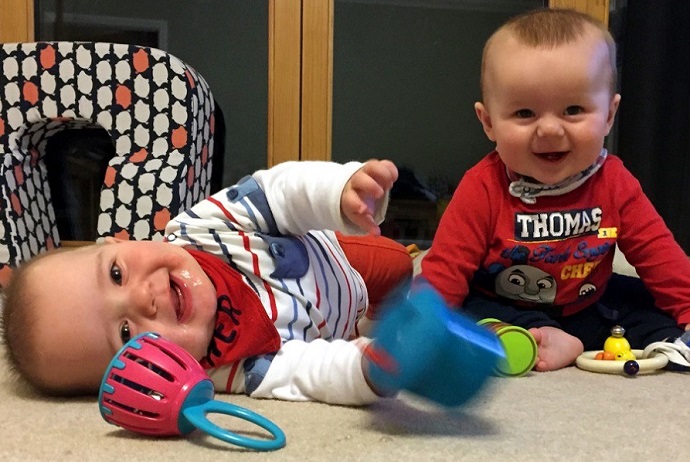