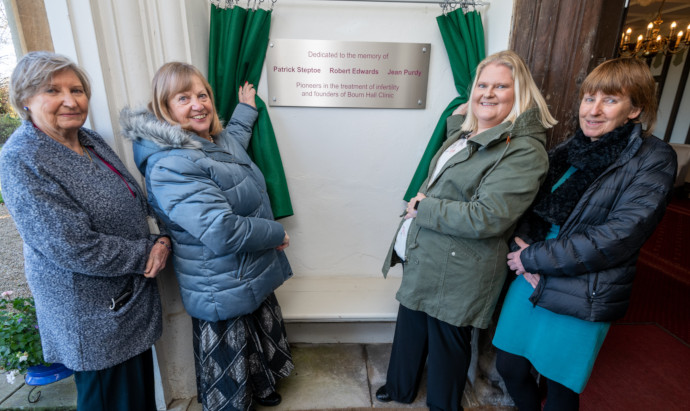 The life of embryologist Jean Purdy is being remembered this Mother’s Day with the dedication of a plaque at Bourn Hall near Cambridge, the world’s first IVF clinic she co-founded in 1980. Her tireless work on IVF alongside Patrick Steptoe and Robert Edwards has helped millions of women worldwide to become mums.

Jean was at the birth of the world’s first ‘test-tube’ baby, Louise Brown, and was a good friend to Grace MacDonald, mum to the first IVF boy, and to Jenny Joy, daughter of Professor Edwards. It was therefore fitting that Louise, Grace and Jenny unveiled the plaque to Jean at Bourn Hall alongside Dr Kay Elder, who joined Bourn Hall in 1984, and shared their memories of the ‘Mother of IVF’.

Covid had delayed the celebration to mark the clinic’s 40th anniversary in 2020, and as access is still restricted only a small representation of patients were able to attend.  An early patient, Angela Roberts came with her IVF twin girls Nikki and Becky and granddaughter Cleo who is also a Bourn Hall baby. Angeliqua Smith, who has PCOS, a common cause of female infertility, came with her baby daughter and Claire and Alex Martin, who conceived their baby after treatment for male infertility. 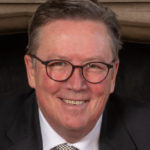 Dr Mike Macnamee, CEO of Bourn Hall, explains the significance of Jean’s role as an embryologist: “Jean was a nurse in Cambridge before accepting the opportunity to work with Professor Edwards at the University. Edwards had a breakthrough in 1969, when the first human egg fertilised outside of the body survived for five days, reaching blastocyst stage. This showed that IVF was possible.

“However, it would be 10 long years and many disappointments until the team’s success with the birth of the first IVF baby, Louise. During this time Jean developed the embryology techniques, supported the patients, and kept it all going.”

Jenny Joy worked with Jean when the clinic first opened and remembers her like an aunt: “I was incredibly fond of Jean. There’s no doubt that her contribution was immense on all sorts of different levels. 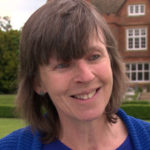 “When plaques were being put up, recognising the contribution that dad and Patrick had made, my father did actually try to get Jean named, because he always said, ‘there are three of us involved in the project, not two, and you should be recognising Jean Purdy’. She was like the glue that stuck them together, but unfortunately at the time it fell on deaf ears.

“When they were looking for a clinic to set up in Cambridge, she found Bourn Hall. Initially they wanted to set up an NHS clinic and that just didn’t work out. My father would be absolutely delighted to know that she is by the door on the way into Bourn Hall.” 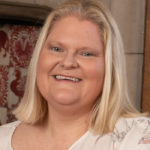 Louise Brown comments: “This is a very special day. I’m just so glad Jean Purdy is finally getting the recognition she deserves; it is what Bob and Patrick always wanted. My mum always said it’s not just about the babies being born; it is about creating families. Without IVF she wouldn’t have had me or my sister or her grandchildren.”

The current patients agree with Louise. 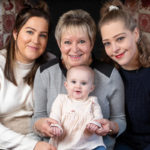 Angela Roberts from Bedfordshire had successful treatment in 1990 and is now a grandma. Nikki’s daughter Cleo was conceived at Bourn Hall with IUI. Angela says: “If it hadn’t been for IVF, my girls wouldn’t be here, and nor would Cleo be here. It’s an absolutely wonderful thing” 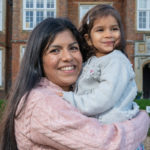 Angeliqua Smith from Luton has PCOS, a common cause of female infertility that causes irregular ovulation. She came with her mum and baby daughter, Isabella. “It is magical being a mum,” says Angeliqua. “There is so much frequent joy in everyday moments, when she says a new word or starts laughing or smiling or just does something completely unexpected. It is just lovely doing things together with her.” 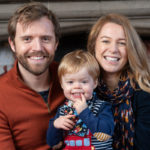 Claire and Alex Martin from Hitchin came with their son Robin, who was conceived after treatment for male infertility. “To us, IVF means hope,” says Claire. “When Robin was born, and he was put on my chest I just burst into tears. We both looked at him and said, ‘we have been waiting so long for you!’ He was so beautiful.”

“He means everything to us,” Alex adds. “This little dude has come into our life and it is amazing.” 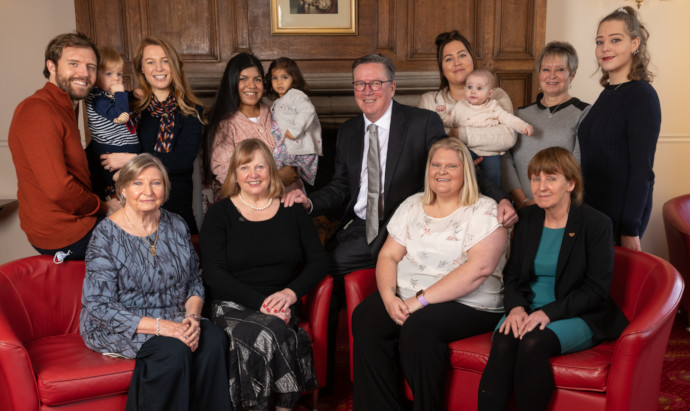 Read more about the history of Bourn Hall here.

The story was featured on the BBC OneShow