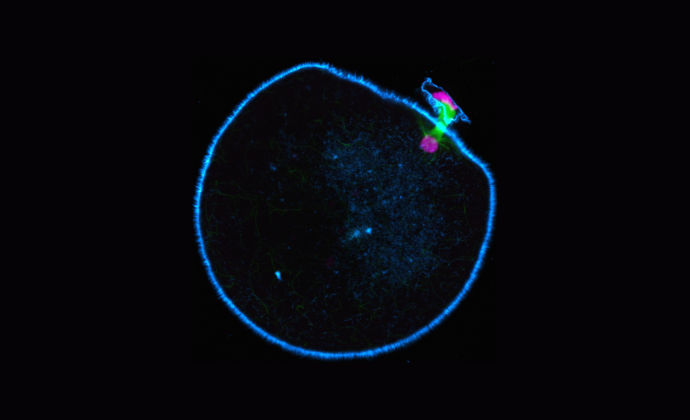 Human eggs may be more prone to errors than other mammals due to shortage of a protein that acts as a ‘molecular motor’ and helps to stabilise the spindle structures that are important in early development of the egg, researchers from the Max Planck Society based at Bourn Hall have discovered. Their work published in Science* reveals a potential method for reducing the chromosome segregation errors that can cause genetic disorders.

Dr Melina Schuh, Director of the Department of Meiosis at the Max Planck Institute for Multidisciplinary Sciences, says that incorrect chromosome numbers in eggs – aneuploidy – is the main cause of miscarriages and age-related infertility.

“Eggs have the wrong number of chromosomes because of a failure in chromosome distribution by the spindle. Our previous work, also in collaboration with Bourn Hall**, showed that human spindles are often unstable, leading to errors. Now we discovered that the reason of this is because they lack a particular protein. By increasing this protein we were able to improve spindle stability and reduce the risk of aneuploidy in human oocytes.”

Molecular motors are biological machines responsible for movement inside the cell. During its formation, the immature egg, or oocyte, divides so that only half the maternal genetic material remains in the mature egg. To enable this to happen a spindle structure is formed that pulls the chromosomes apart. If the egg gets this wrong the resulting embryo will have too many or too few maternal chromosomes, a condition known as aneuploidy.

Research by Dr Melina Schuh’s group, has revealed remarkable differences in spindle organization in different mammals. Humans were found to be deficient in the molecular motor KIFC1 (kinesin superfamily protein C1), a key spindle-stabilizing factor found in the oocytes of other mammalian species.

Dr Schuh explains: “Our data reveals a cause of the differences in spindle stability and provides a potential method for reducing chromosome segregation errors in human oocytes.”

“By delivering a defined amount of KIFC1 protein into human oocytes, we were able to rescue spindle instability and reduce the risk of aneuploidy in human oocytes,” adds Dr Chun So, postdoc in Dr Schuh’s lab, and the first author of the study.

Immature human oocytes are not available in large quantities, which makes it challenging to gain mechanistic insights into the organization of spindle poles and the causes of spindle instability during human meiosis. For this reason, Dr Schuh’s department has a satellite laboratory at Bourn Hall, the world’s first IVF clinic, where many of the early treatments for infertility were pioneered and there is a continuing commitment to improving patient outcomes.

Martyn Blayney, Science Director at Bourn Hall, is one of the authors. He comments: “Sadly, many pregnancies do not go to full term. Through our previous collaborations with Melina Schuh’s researchers we have gained insights into why this is so, particularly around how eggs decline in quality with age. This new work looks at the role of the molecular motor at a very early stage of egg development and potentially how its operation can be enhanced.

“Although this information does not translate into improved treatment in the near term, knowledge of infertility on a molecular level does provide the opportunity for new targets for future medicine. We are always immensely grateful to the patients that donate immature eggs and enable this valuable science to progress.”

Human females are born with thousands of immature eggs and each month only one reaches the right level of maturity to be fertilised. The remainder are lost gradually until the woman is about 53 when they are all gone, and she reaches menopause. For IVF, the ovaries are stimulated to increase the number of mature eggs available for collection. At Bourn Hall, patients are given the option to donate to science some of the immature eggs that are not suitable for treatment.

Human oocytes are deficient in the molecular motor KIFC1 (kinesin superfamily protein C1), a key spindle-stabilizing factor in oocytes of other mammalian species.

Spindle stabilization is likely achieved via the formation of static crosslinks along parallel microtubules at the poles and the alignment of antiparallel microtubules in the central region of the spindle. Because human oocytes are deficient in KIFC1, the researchers propose that the deficiency of these activities renders their spindles unstable.