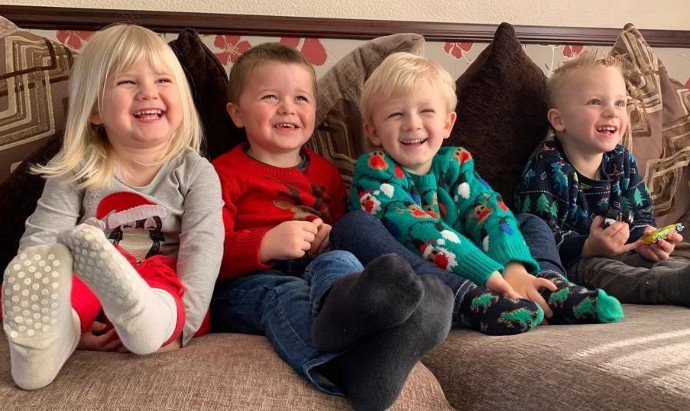 Three former colleagues who became life-long friends after all having fertility treatment at Bourn Hall’s Colchester Clinic have a very special Christmas tradition that they never miss.

Although Vicky, Carly and Nikki, who now have four children between them catch up regularly throughout the year, they always meet up just before Christmas for an annual festive photo of them with their children together on the sofa.

The three friends each gave birth to a son in the same year following IVF treatment at Bourn Hall: Vicki had son William, Nikki had son Nathan and Carly had son Rhys.

The three women first met whilst working at the Halifax bank – at one point working at the same branch – Vicki and Carly as Managers and Nikki as a Mortgage Advisor – and discovered that coincidentally they were each having problems conceiving. During their treatment at Bourn Hall Clinic they were able to provide an invaluable support network for each other during their journeys through IVF and became great friends.

A few months after William was born Vicki and husband Mark then got the shock of their lives when they discovered that Vicki had got pregnant naturally – with an unexpected ‘little extra’. They welcomed daughter Evelyn the following year: “Both of our children are miracles,” says Vicki.

“It was fantastic for us to have other people close who understood exactly what we were going through; it has brought us closer together,” says Vicki.