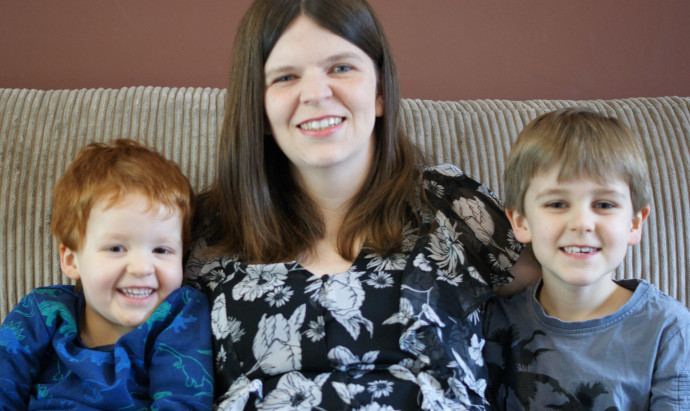 It takes on average eight years to get a diagnosis for endometriosis which is a debilitating gynaecological condition that can damage the reproductive organs.  53% of sufferers will have been to A&E with excruciating pain. Dr Thanos Papathanasiou, Bourn Hall’s Medical Director, sees many women with the condition, he says that few knew how the disease would impact their fertility.

This is something that is often not fully explained prior to surgery to treat the condition. To raise awareness and provide advice on how the condition affects fertility, Bourn Hall is organising a webinar, ‘Endometriosis and Fertility’, during Endometriosis Awareness Month, coordinated by Endometriosis UK.

Paula from Haverhill in Suffolk suffered an early miscarriage as a newly-wed. She didn’t imagine that it would be the only time in her life that she would get pregnant naturally. After two years of unsuccessful attempts to conceive again, Paula was shocked to discover that she had endometriosis, a disease where tissue similar to that found in the lining of the womb can grow over the ovaries and fallopian tubes. She is sharing her story to raise awareness of the condition.

Paula says: “I had always suspected that I might struggle to have a baby as my periods had become increasingly erratic since I was a university student and my mum had fertility issues when she was younger. However, it came as a complete surprise to be told that I had endometriosis as, although I didn’t have the classic symptoms, my diagnosis was classed as ‘severe’.”

Up to half of those with endometriosis have fertility issues

Around one in ten women in the UK have the condition, with symptoms that can include: painful, heavy or irregular periods; pain during or after sex; painful bowel movements; fatigue; and infertility. Its symptoms are similar to other conditions, meaning it can take years to get a definitive diagnosis – and up to half of those with endometriosis will have fertility issues.

New research by Endometriosis UK has found that 62% of women (aged 16-54) would put off going to a doctor with symptoms of endometriosis because they don’t think don’t think they’d be taken seriously, or think symptoms including painful periods are normal. This statistic rises to 80% of 16-24-year-olds.

Commenting on the new research, Emma Cox, CEO of Endometriosis UK said: “Endometriosis is a long-term chronic health condition affecting 1.5 million in the UK, yet it still all too often considered a taboo or not important due to links with the menstrual cycle. Symptoms including chronic pelvic pain, painful periods, painful bladder and bowel movements, and infertility, can have a major, life-long impact, physically and mentally. But far too many find their symptoms are not believed nor taken seriously.

“Myths such as “chronic period pain is normal” or “you must have a low pain threshold” manifesting in society, workplaces, schools, and even healthcare settings contribute to those experiencing symptoms being put off from seeking medical advice and contribute to diagnosis taking on average a shocking 8 years.

An inquiry by MPs into the impact of endometriosis highlighted the devastating impact endometriosis can have on all aspects of a person’s life, the recommendations included introducing menstrual well-being in the school curriculum so that young people recognise the warning signs of menstrual health conditions and know when to seek help.

Egg freezing to preserve fertility ahead of surgery

Dr Papathanasiou says: “Endometriosis is a progressive condition, so being aware of the implications at an early stage can help to improve the chances of a successful pregnancy.

“Women with severe endometriosis symptoms may need complicated and delicate hospital surgery to remove adhesions and this can sometimes result in long-term damage to their tubes and ovaries. It is important that women are informed before such a procedure that they have the option to freeze their eggs, which would preserve their fertility should they want children in the future.”

Endometriosis can cause infertility

Following their early miscarriage, Paula and her husband Mark soon started trying again for a baby – but as the months went on nothing happened.

“The early miscarriage hit me really hard because it was only five weeks after we got married,” says Paula. “I was devastated but it did give me hope that, despite my irregular periods, I was able to get pregnant.

“Slowly, one by one, lots of my friends started getting pregnant. I wanted to shut it out. I would put on a brave face and smile and then go back home and think to myself ‘when is it going to be my turn?’”

The couple went to see their GP, who sent them for tests. “Mark’s tests all came back fine but my blood tests showed up some abnormalities,” says Paula.

A laparoscopy revealed that Paula had severe endometriosis as well as polycystic ovary syndrome (PCOS), another common cause of infertility.

PCOS and endometriosis can run in families and Paula’s mum also suffered with a lot of pain. “After having her three children she finally had a hysterectomy to alleviate her symptoms,” says Paula.

Paula and Mark were told that they were entitled to NHS-funded IVF treatment and they opted to go to Bourn Hall Clinic just outside Cambridge. In July 2013 they had their first IVF treatment at Bourn Hall and were delighted when it was successful. Son Ethan was born in April 2014 and Paula was overcome with emotion. “I just burst in to tears,” she says.

After their successful NHS-funded IVF treatment, the couple saved up enough money to pay for two further cycles should they need it because once a couple has a child they are no longer eligible for NHS funding for IVF. Their second treatment at Bourn Hall was also successful the first time and their second son Oscar was born in November 2017.

“I am over the moon with my two boys,” says Paula, who works as a Data Manager. “We have got the family of four we always wanted. It is just brilliant.”

Bourn Hall is hosting a free webinar to discuss how endometriosis can cause infertility, ‘Endometriosis and Fertility’, on Thursday 11th March at 7pm.

Endometriosis UK provides vital support services, reliable information and a community for those affected by endometriosis – it is fund-raising during March to help further its work and to raise awareness of the condition. More information is available at endometriosis-uk.org.

To donate to Endometriosis UK and support their work visit: bit.ly/JustGivingEndoUK