“I was never told that I couldn’t have children,” says Kathleen. “But having been diagnosed with Polycystic Ovarian Syndrome (PCOS) and having had a large ovarian cyst removed with surgery that left significant scarring, I expected there to be a problem.” 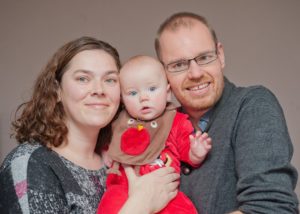 Kathleen was diagnosed with polycystic ovaries when she was younger, which resulted in a 9lb ovarian cyst being removed via general surgery when she was 30, followed by additional keyhole surgery to remove scar tissue that caused complications from the previous operation. Undeterred, she and her partner Paul agreed that they would try IVF for a chance of having a baby when they were unsuccessful in getting pregnant naturally.

The couple met when Kathleen was 25; they both wanted children, but with job changes, moving locations and health concerns the pair had to wait until the right time.

After the surgery, the couple tried for several more years before seeking help. Looking at Kathleen’s medical history, her age and knowing her sister had similar difficulties in getting pregnant due to PCOS, the couple were referred by their GP to St Albans hospital for tests.

After tests, which confirmed Kathleen had one blocked fallopian tube and cysts on her ovaries, the couple were recommended NHS-funded IVF. Kathleen, now 39, was just below the age limit.

“Of the three clinics we were offered we chose Bourn Hall Clinic Cambridge as it was recommended by a friend and was in a convenient location,” says Kathleen.

The couple attended a seminar in July 2014 and booked their first appointment.

“The minute we walked through the door we knew we had made the right decision and we went in with a positive attitude and a ‘can do’ approach.

“Our consultant was very helpful and the session informative,” says Kathleen. “We knew the success rate was lower at our age but we didn’t want to get caught up in any related negativity.”

Just as they were starting their first NHS-funded IVF cycle Paul experienced a major health scare when blood vessels burst in his eye, affecting his vision. Paul was subsequently diagnosed with diabetes and high blood pressure.

Paul comments: “Following my health scare we were in two minds about continuing with IVF but as we had come so far and we appreciated how fragile life was we wanted to give it our all and carry on.”

Kathleen adds: “The whole ordeal was scary and we were unsure of the future but we hoped that as long as we followed doctors’ orders and tried our best the IVF cycle would have a good chance.”

In preparation for IVF Kathleen had to self-administer the drug to stimulate her ovaries. Bourn Hall provides all patients with a drug teach session to help them feel confident in doing this.

“I don’t like injections at the best of times so was daunted about doing it myself but I knew it was something that had to be done if we wanted to have a baby.

“I was shown how to inject myself and allowed to practice on a ‘jelly belly’ beforehand.

“Paul was really very supportive and sensitive and I told myself that if I did feel something – bad or good – it was because it was working. 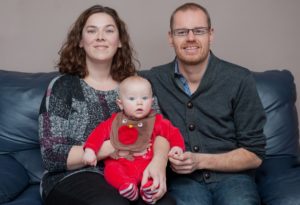 “Luckily I responded well to the medication and produced good quality eggs.”

The day before her 40th birthday Kathleen took a pregnancy test, which was positive. Kathleen attended the Clinic to have her pregnancy confirmed and over the course of her pregnancy was monitored carefully to check everything was going well.

Kathleen says: “You can’t help getting your hopes up and there were days we would doubt the success of the process but Bourn Hall looked after us very well along the way; I had frequent reassurance scans due to my age and previous health problems. The staff helped put us at ease and kept us well informed.”

“I remember arriving in the hospital and due to my age being referred to as a ‘Geriatric’. You can’t get wound up about things like this as it doesn’t help and for anyone in a similar situation I would say ignore the figures and enjoy the experience.”

You can find more more stories about overcoming PCOS  here.

Find out about IVF treatments here. 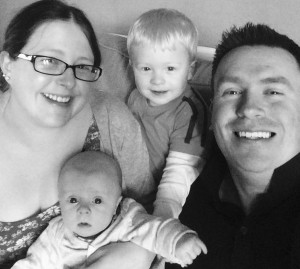