Kate tried to lose weight to have a baby, supported by Lorraine Kelly
Skip to content 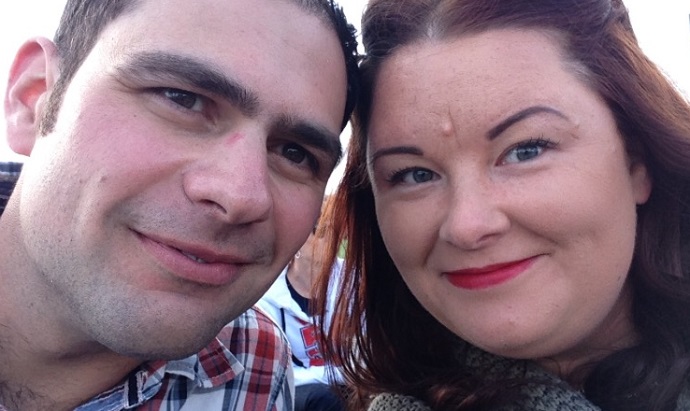 Kate wanted to lose weight to have a baby – Lorraine Kelly’s show on ITV was the spur that she needed to ‘change one thing’. Kate received the results of her Fertility Check on ‘Lorraine’ – she tells us how she came to be at Bourn Hall for a Fertility Check.

I was lucky enough to marry my best friend Chris. Not only were we excited about getting married, we were excited about starting a family and sharing our love and future together.

Months passed with little and no sign of being pregnant. We were not too fazed by this as we were in our early 30’s and knew it could take a year or two.

I had also been overweight for most of my life, trying different diets and ‘lifestyle changes’ but felt like nothing really worked, but you see overweight parents all the time right…? So I honestly felt there were no concerns. 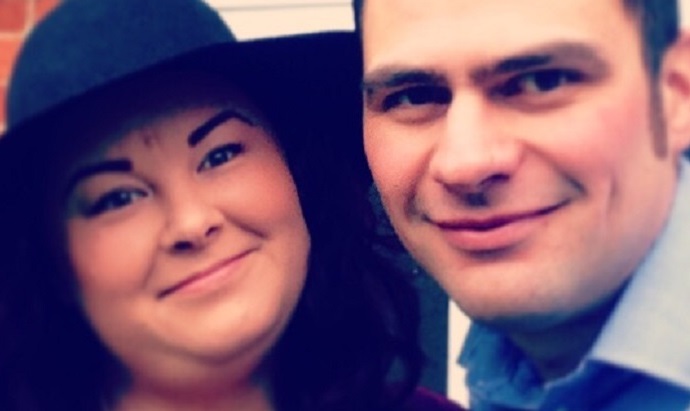 Then our first wedding anniversary came round. The last 12 months had flown by, but I did secretly expect to be pregnant by now.

A few more nice holidays were the perfect excuse when people asked that all important question “so when are you going to have a baby?” Little did they know that every holiday we booked, we hoped to not actually go on, we would happily lose our deposit. It would be for a good reason after all.

Now it was two years of trying, and no luck. I had used a digital fertility monitor and this showed that I wasn’t ovulating. But I knew that women don’t ovulate every cycle – we agreed to go to our GP and see what they could suggest.

Between this decision and the appointment, I had been watching morning TV and up popped Lorraine Kelly. She was talking about a segment that was going to feature in the show called “Change One Thing”. In her perfect Scottish voice Lorraine convinced me to email the show, to explain mine and Chris’ situation. I certainly didn’t think we would end up where we are today, that’s for sure!

A few calls and a FaceTime interview later, I was talking to the producer of the Lorraine Kelly Show and he wanted me! (And Chris but mainly me to start off with!!!)

At a visit to the doctors a few weeks later she suggested a progesterone blood test for me and a semen test for Chris. My blood test showed that yes I hadn’t ovulated, but Chris had loads of sperm and they were all fine.

January 5th at 0850 was my slot and my moment to really make some changes. I was introduced to Victoria Milligan who would be my mentor, a fantastic woman, an inspiration to many. We spoke about diet and exercise and changing my life in order to have this baby! I felt so positive and maybe in a few months we would be pregnant.

A bit of exercise and a bit of healthy-eating should do the trick, so I threw myself into this new lifestyle. I joined a gym and got rid of all the naughty food we had in the house.

Then a heart-breaking phone call from our GP, “I’m sorry I can’t refer you until your BMI is lower”. This meant years of diet and exercise for me, or that’s how I felt.

My husband was staying positive as usual and this really did help, even when I was having a bad day. I started a Facebook page and my friend did a piece in the local paper on mine and Chris’ story. I really put myself out there to make sure I didn’t give up – nothing like public humiliation to keep you sticking to that diet!

“Why wasn’t my body working?”

I had looked at various fertility clinics around the country and tried to educate myself as much as possible. I knew I wasn’t ovulating, but didn’t know why. I was convinced I had a growth in my womb, or a blockage in my Fallopian tubes and even sometimes wasn’t sure I had the right bits to do the job, because quite frankly, why wasn’t my body working? Everyone else’s seemed to.

Two and a half years into trying, a few more stints on Lorraine, (she was becoming a regular feature in our life now!), two and a half stone lighter but still no ovulation. That’s it, let’s just call it a day, I would think. But then I was still young enough to keep trying different things and still lose weight. Just keep going, I would think in the next breath.

Chris and I started to discuss different things we could do if the NHS couldn’t do anything for us. We thought we would leave it until Jan 2016 then pay £800 for a fertility MOT at Bourn Hall Clinic. This was the next step for us, but I had to be ready for whatever I was going to hear from the fantastic doctors at this prestigious clinic. Was I really ready for this or could I carry on living in my own world hoping that it would happen naturally…? 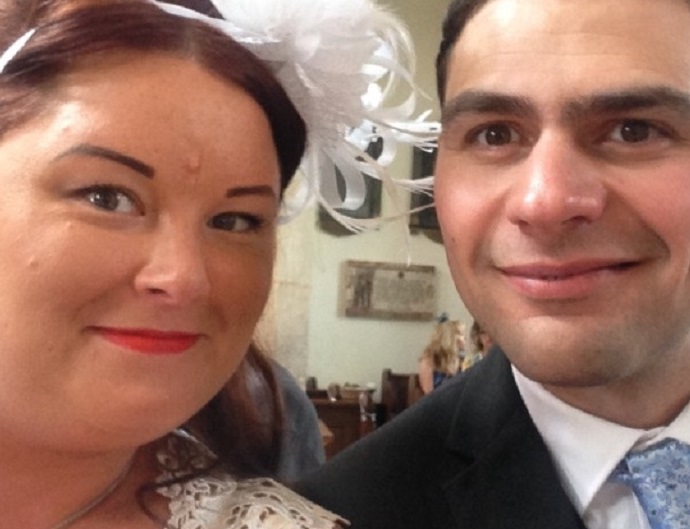 August 2015: surprised by a film crew at work! Yes, that’s right, I thought they had come to check up on me to make sure I was still sticking to my healthy living regime. No, they had come to surprise me with the news that Bourn Hall had donated the Fertility MOT for Chris and myself to have ASAP.

Shock! I couldn’t believe this. This doesn’t happen to people like us, what’s going on! We turned up at Bourn Hall’s Cambridge clinic a few days later for my first blood test and Chris’ semen analysis. We spoke to a lovely lady who explained exactly would happen, on that day and on our return.

We both left there feeling reassured and excited. Three weeks later on day 24 of my cycle we head back to the clinic for me to have a pelvic scan and HyCoSy procedure. I was anxious of what might be found, or not. After all this was the day when we would find out if we would ever be parents or not. I had read up on what the procedures were and how they were carried out, and instantly felt nervous.

Nervous about the procedure

Apart from my smear tests I hadn’t had any gynaecological explorations. Was it going to be painful, how long was it gong to last, how many people were going to be in the room? I needn’t have worried. Dr Gideon Verwoerd greeted us with a smile, and instantly relaxed us. He explained in more depth what would be happening, and assured me I would be fine throughout the procedures.

Ken, the sonographer, sat me down in a room with two screens, a big chair, and the all important curtain. Chris was sat next to me holding my hand.

Sharing the moment with ITV

Oh, did I mention ITV wanted to film Chris and I at the Bourn Hall Clinic. (!!!) I had got myself into this and wanted to help other couples that may be in the same situation as us. So part of me didn’t mind sharing this experience but the other half was a jibbering wreck.

What if they found something sinister? What if I could never have our child? Did I want this filmed…? Luckily the film crew were sent out during the second procedure. And everything was carried out with the utmost discretion. A little bit of discomfort with the procedure but no worse than period pain. Also I had been my sister’s birthing partner twice, so if we did get pregnant, I was pretty sure labour was going to be worse. So man up Kate and get on with it, I kept thinking!

After five minutes, and bit of explaining what was on the screens, I liked that we could see what was going on inside me and that Ken and Gideon talked us through the whole thing.

Results time. This was it. This. Was. It. So, what did they find… everything with my Fallopian tubes was fine, there were no blockages, no PCOS and nothing sinister. Yay!

However the lining in my uterus isn’t good quality, due to low progesterone, and my body’s resistance to insulin is what seems to be the problem. It’s suppressing my progesterone levels, so I don’t ovulate.

At last we are getting somewhere! Chris’ results sadly showed that his little swimmers didn’t do their job very well. They needed waking up, and a SatNav(!), but there were lots of them so definitely room for improvement!

Dr Verwoerd prescribed me some drugs to help with my insulin resistance and a progesterone gel to take for ten days during my cycle starting at day 24. And encouraged us to keep exercising and eating healthy and for me to lose some more weight.

And Chris got some supplements to help improve the quality of his swimmers. We both needed to avoid alcohol for the next three months and be healthy. This is crucial for us now.

“The staff at Bourn Hall were fantastic”

Chris and I definitely feel like we have made progress. Even though we came out with more problems than we went in with, we now have a clear direction of where we are going on this journey.

So we will head back soon to see if there has been any improvement for both of us. Fingers crossed there will be. There might even be an ovulation, or better still a pregnancy …! If not there are other options still, and now we know what they are.

The staff at Bourn Hall Clinic were all fantastic. Made us feel very relaxed, and at ease at this nervous time in our lives.

We would strongly recommend that if anyone is unsure of their fertility status or have been trying to get pregnant for a while, just to go and have the Fertility MOT. What have you got to lose? It will change your way of thinking. Knowledge is power, and quite often the key to success.