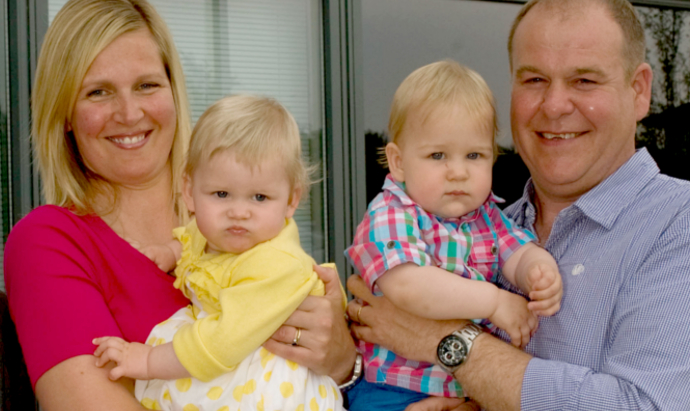 Unexplained infertility was not going to stop Emma and Russell from having a family. It was on the fifth attempt of IVF, that Emma fell pregnant with twins.

After getting married at the age of 21, Emma thought she had her whole future mapped out. Enjoy life as a couple with husband Russell for a few years and then start a family when she was in her late twenties. In fact, Emma had to wait until she was 36 to become a mother.

Emma, from Norfolk, says: “As newlyweds we were in no hurry to have a baby.  I just assumed, like most people do, that we’d leave it a while and then I would come off the pill and get pregnant. It would be as simple as that.”

The couple started trying in 2003 when Emma was 26. She recalls: “My sister-in-law got pregnant really easily and that was difficult for us. You feel like you are the only ones having problems but actually there are loads of people out there in the same boat.”

“We went to our doctor after trying for a couple of years, but tests revealed that nothing appeared to be wrong with either of us. We were perplexed.”

A visit to Bourn Hall

In 2009, new NHS funding rules were put in place, meaning the couple were given the opportunity for three fresh cycles of funded IVF treatment. They jumped at the chance and went to visit Bourn Hall Clinic in Cambridge on one of its open days.

“We wanted to go to Bourn Hall as that is where IVF all began,” says Emma.

The couple were told that IVF with ICSI, when a sperm is injected directly into the egg, would give them the best chance of having a baby.  As no reason had been found for their infertility, Emma was very optimistic about her first cycle of treatment.

On the first round she thought she might be pregnant but the test was negative. The worst thing about it was that all their family knew they had had the treatment and she felt bad telling everyone it hadn’t worked. They decided they would keep any future treatment dates just between themselves and their parents.

Over the next two years the couple had five attempts at IVF. “We had always been prepared to give it as many goes as we were allowed,” says Emma. “We had been given such a fantastic opportunity by the NHS.”

The couple remained stoical throughout their treatment, which spanned a couple of years, throwing themselves in to their hobbies; Emma has horses and Russell enjoys motorcycling.

Emma says: “We got ourselves out and about at weekends and kept ourselves busy and that helped to take our minds of it.

“The staff at Bourn Hall were brilliant we felt as though we could ask them anything, they were really helpful and talked everything through with us.”

The NHS funding allows three cycles of egg stimulation.  The eggs are fertilised and any embryos not needed for that cycle are frozen for future treatment.  If these first three cycles of IVF are not successful, couples can have up to three further attempts using the previously frozen embryos.  In Emma’s case, her third cycle of stimulation had produced relatively few eggs and so the couple had only been able to freeze embryos for two additional attempts. Emma therefore knew that her fifth treatment was their last opportunity.

“After treatment I just stopped. I took three days off work and put my feet-up. I don’t know if this made the difference but I wanted to give it every chance I could.

“When I took the pregnancy test and it was positive I just couldn’t stop smiling. I rang my husband and then I went to the pharmacy and bought loads more pregnancy tests. I kept testing myself again just to double-check it was true!”

At Emma’s first scan at Bourn Hall they confirmed what she had secretly suspected; she was expecting twins.

“We were just so happy”, says Emma. “I had a great pregnancy and at the 18-week scan we found out that the twins were a boy and a girl. I just let nature take its course after that and really enjoyed my pregnancy.”

In July 2012, Edward and Evie arrived in the world to the absolute delight of their parents.  “We were over the moon,” says Emma. “We felt so lucky.”

As the twins grow up they are becoming little companions for each other.

“Motherhood is hard work but it is what I have wanted for so long. We waited such a long time to become parents and the twins are definitely worth it.”