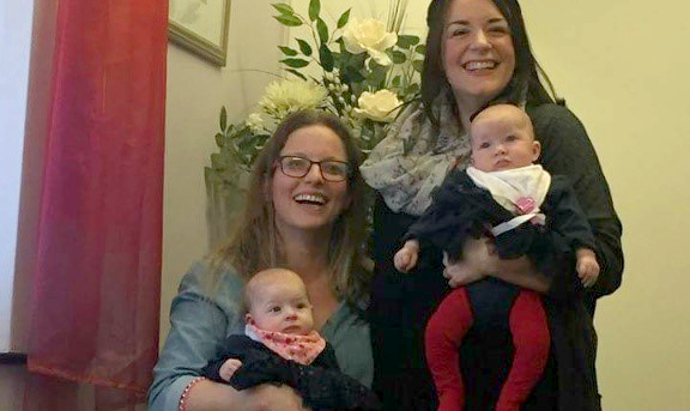 When Emily got together with Debbie five years ago they soon realised that they wanted a family together, and as a same-sex couple they were keen to explore the option of having their own children using donor sperm.

Two years ago the couple started looking at how they might go about it.

“It was very important to us that we used a regulated fertility clinic,” says Emily. “We were not married when we started looking into it, although we are now, and wanted both our names on the birth certificate. This was really important to us and we wanted to go about it in a safe and structured way.”

As Emily is six years younger than Debbie they decided that it should be Emily who underwent the fertility treatment. “We thought that as I was younger it would increase our chances if I tried first,” she says.

“After doing online research we went to a clinic in London and had two rounds of fertility treatment there, but it didn’t work and we found the clinic very impersonal so I wasn’t keen to go back.”

Emily and Debbie had sourced their own sperm from a company in Denmark and still had one frozen vial left in storage with the London clinic. “The Danish company we bought the sperm from adheres to UK standards and laws but the big difference between getting sperm from Denmark and from a UK clinic was that we were allowed to see early childhood photographs of the sperm donor and hear his voice so we felt as though we got to know him as a person a bit more. Being able to see baby pictures of potential donors really helped us to find someone with similar features to Debbie,” says Emily.

The couple decided that they would go with the last vial of sperm to Bourn Hall Clinic and discovered that it has a satellite clinic in Peterborough. Emily and Debbie live in Lincolnshire but both work in Peterborough, so they found this really convenient.

“Being able to nip in for appointments and scans up the road was just perfect for us,” Emily says. “There was far less disruption to our working day and that made us more relaxed; I think that made a massive difference.” 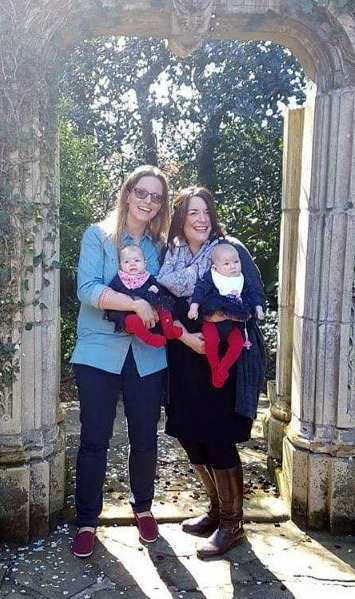 Emily and Debbie had virtually all of their appointments and scans at Bourn Hall’s Peterborough clinic, with only the egg collection and embryo transfer taking place at Bourn Hall’s Cambridge clinic. The frozen sperm was transferred from their previous clinic to Bourn Hall for storage in its sperm bank.

Bourn Hall was one of the first UK clinics to have its own sperm bank and can offer free IVF treatment for those who meet the criteria for sperm or egg donation.

“I produced a lot of eggs,” says 30-year old Emily. Her eggs were fertilised with the donor sperm using a process called ICSI (intra-cytoplasmic sperm injection), which involved directly injecting each egg with a single selected sperm. The embryos were kept in a laboratory incubator for five days.

Two embryos were then transferred to Emily and the couple had to wait 14 days before taking a pregnancy test.

Emily quickly convinced herself that the IVF treatment hadn’t worked.

“I had spent the weekend with stomach cramps and so was really not hopeful at all,” she says. “I thought to myself ‘oh well, that’s it all over and done with.’

“I woke up really early on the day I was due to take the pregnancy test, took the test and thought it looked like a negative result. I was absolutely devastated but eventually managed to get back to sleep. Then Debbie woke me up and said she thought the test might be showing a positive so we drove to the chemist and sat outside until it opened. I bought more pregnancy tests and took them into the toilets at Sainsbury’s – it was very bizarre!”

The couple were delighted when the tests confirmed that Emily was indeed pregnant and at their eight week scan were told they were expecting twins.

“Debbie was exceptionally excited by this news but I went into an utter panic for two weeks,” laughs Emily. “I had spent all of that time hoping for a baby and then suddenly discovered I was having two. I had a bit of a meltdown! When we went back for the 12 week scan, though, it seemed exciting and manageable.”

Maisie and Florence were born in December 2016 and proud mum Emily says: “They make our world complete. We wanted them so much. We’ve got a lot of lovely family support around us, as well as a group of friends we call ‘The Fairies’ as they are the girls’ ‘fairy godmothers’ who will always be looking out for them.”

Emily and Debbie’s experience at Bourn Hall was a really positive one, reports Emily: “When we went in for our appointments in Peterborough with Sue, our fertility nurse specialist, it was like going in to see an old friend. She took the time to get to know us and what was going on in our lives, and she really settled me down when I panicked after finding out I was expecting twins. We have recommended Bourn Hall to a number of our friends and some have already started treatment there.” 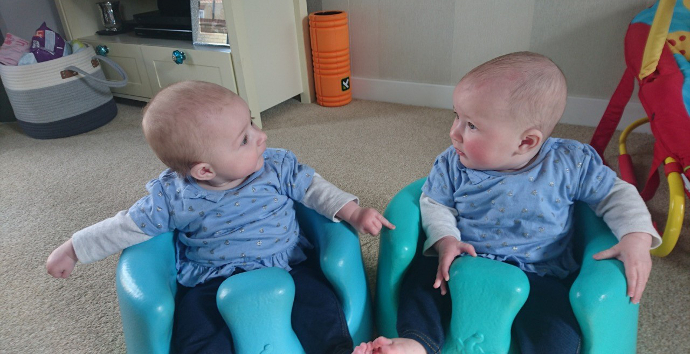 For more information take a look at our Pathways to Parenthood blog.