Secondary infertility is a term used when someone has conceived and had a child without difficulty but is then unable to get pregnant or carry a baby to full term again.

Joanne, now aged 39, encourages others to get advice as early as possible if they are struggling to conceive.

When Joanne was 26 she stopped taking the contraceptive pill.

“We thought we would see if I got pregnant but we were quite relaxed about it at that point.  Our lives were really busy.

“After I turned 30 however we started actively trying for a baby and I was surprised that I just wasn’t getting pregnant. I felt really guilty for Ian in case the problem was with me and I had already had a child. I was worried it would put pressure on our relationship.”

Joanne had suffered with painful and heavy periods since she was a teenager. The contraceptive pill had eased her symptoms, which returned when she stopped taking it.

“I wondered if I might have endometriosis but it can take years to diagnose,” she says.

Specialists at her local hospital put Joanne on an ovulation induction drug, clomid, for 10 months and conducted a series of tests on both her and Ian.

“Ian’s sperm tests came back as all fine and it was found that I did have mild endometriosis but it was not considered bad enough to affect my fertility,” says Joanne.

The couple were told that they had ‘unexplained infertility’ and that their best chance of having a baby would be to have IVF treatment.

“My GP told me that the criteria for NHS funding had changed in our area and that if a couple were in a relationship in which they could not conceive, even if one of the partners already had a child from a previous relationship, they were eligible for NHS-funded IVF treatment.

“It was so strange because when I had Chanelle I was a teenage mum but when I fell pregnant for the second time I was classed as a geriatric mother. I didn’t feel any different in myself and it made me feel really old,” she laughs.

Daughter Edie was born in October 2017.

“It was surreal when she arrived; she was finally here and she was alright,” says Joanne.

Big sister Chanelle is now 22 and studying for a degree at university. “She is like a second mum to Edie,” says Joanne. 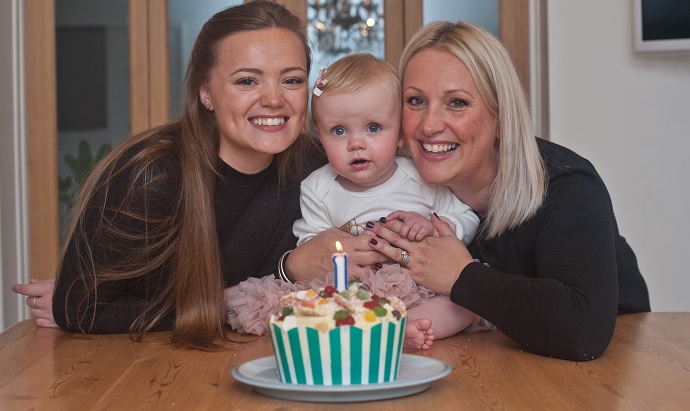 “Go to your doctor if you have concerns.  Be quite persistent. Don’t put it off and think ‘maybe something will happen’ because time can fly by.

“If you feel that there might be issues with your own health make sure you mention it and don’t be fobbed off.

“There is so much that can be done to help people struggling to get pregnant and I would advise anyone struggling to conceive not to be embarrassed and to seek help.

“For a lot of people some help with lifestyle changes or simple medical intervention could help them conceive naturally and if it turns out that you do need fertility treatment as I did then the younger you are the better your chances.”