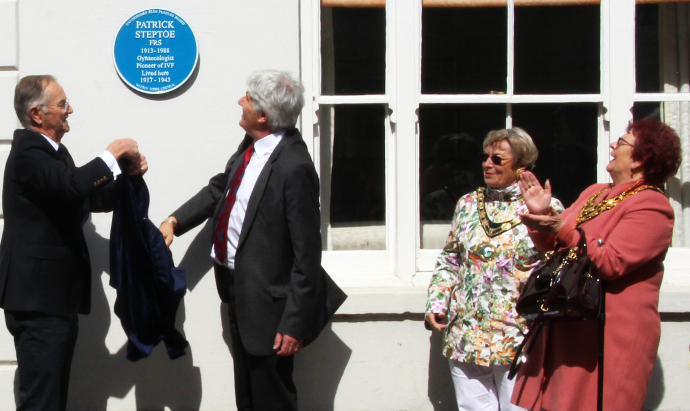 Patrick Steptoe’s lifework was remembered at a ceremony to unveil a blue plaque at his childhood home in Witney. Peter Brinsden (on left with Steptoe’s son Andrew on right), was taught the new fertility treatment by the ‘father of IVF’ at Bourn Hall.  This was the world’s first IVF clinic and where the techniques that would transform the scientific research into a robust medical treatment were developed.

Peter says: “I remember so well learning the fundamentals of this new specialty of IVF at Bourn Hall. In particular I remember how Steptoe was almost obsessive about the importance of doing one’s very best for each and every patient and the quality of their care.

“He was a hard taskmaster! Being taught by him how to collect oocytes/eggs via the laparoscope was quite daunting, but he was always a very supportive teacher. I remember in particular our lunchtime meetings at which most of the team would sit down and discuss and analyse each patient’s care – from all aspects of their treatment – the clinical aspects led by Steptoe and the scientific side led by Edwards – fascinating times and a wonderful way to learn about the management of IVF patients’ treatment.”

Since those early days over 6 million babies born worldwide following treatment by IVF, a medical treatment developed by Steptoe with Robert Edwards and Jean Purdy at Bourn Hall; the clinic they established after their success with Louise Brown and Alastair Macdonald the first IVF babies.

Louise Brown comments: “Patrick Steptoe was like a grandfather to me. My mother, Lesley Brown, always said that she trusted him from the first moment that she met him. Patrick Steptoe died when I was 10 years old so I did not know him well. We last met when we were guests on a TV programme together and he was proud of the children he had helped bring into the world. His legacy will live on as there are now millions of people in the world who owe their existence to the work of the IVF pioneers.”

Steptoe was a consultant obstetrician and gynaecologist at Oldham Hospital in Lancashire, with a special interest in female infertility and diagnostics techniques, when in 1968 he met with Edwards, a Cambridge geneticist and embryologist. This was shortly before Edwards achieved the first successful growth of a human embryo outside the womb.

Steptoe was an expert in laparoscopy, a forerunner to keyhole surgery, that would allow the collection of mature eggs without abdominal surgery, and he also had a large number of patients that would benefit from IVF if it had been available.  Many of these women agreed to assist with the research by donating eggs.

Working in their spare time, with the assistance of Jean Purdy who was running the laboratory, the three began a difficult and frustrating journey to transfer embryos to the womb and achieve a live birth.  This took a further ten years and succeeded with the birth of Louise Brown.

Peter explains that the birth was one of the greatest scientific achievements. He said; “When Steptoe and Edwards presented the results of their work later in 1978 at the Royal College of Obstetricians and Gynaecologists in London, they received a standing ovation; something which had never occurred before in the whole history of the College. At the American Fertility Society meeting in 1978 they also received a standing ovation at the end of their presentation.

No funding to establish IVF as a treatment

“Such acclaim for their achievements in their work by their peers, however, did not stop continued severe criticism by others, and no funding for further research or treatment was made available to them by any of the Universities, the Medical Research Council, or other bodies. Patrick Steptoe and Bob Edwards had, therefore, to set up a private IVF clinic at Bourn Hall, close to Cambridge, where Bob was working. Opened in 1980, this became the World’s first specialist IVF clinic.

Steptoe passed away on the 21st March 1988 just after receiving the news that Bourn Hall had achieved its 1,000th IVF baby.

Bob Edwards, in a tribute to Patrick Steptoe’s life at the Royal Society in 1989, ended his talk by saying: “Great charm carried him through many difficult situations, inspired enormous devotion in his staff and patients and no doubt helped to carry him through much of the criticism aimed at him. The consequences of his work have spread everywhere. Laparoscopy has been equally successful as his work on IVF. He was optimistic, good natured, reliable, and a deeply affectionate family man. Popular at Bourn Hall, many staff and patients admired him almost beyond belief. He was unflinchingly loyal to his patients and friends.”

His son Andrew gave a moving tribute to his father:  “Patrick was first and foremost a doctor intensely concerned about the health of women, and did much work on cervical cancer, pelvic pain, and sterilisations as well as infertility. He worked very hard, doing a five-and-a-half-day week, and generally going into the hospital on Sunday morning as well to see how his patients were getting on.

“His exceptional contributions to medicine and science came through his work with Bob Edwards, each bringing unique skills to the collaboration. But I think much of his commitment came from his upbringing here in Witney, his parents’ strong sense of service, and his mother’s example in helping poorer people in need. So I’m very proud that the town has recognised him in this way.”

And now a second generation of women, like Amy Harris – Norfolk’s first IVF baby, who has just given birth to her own IVF baby, are benefiting from his work. 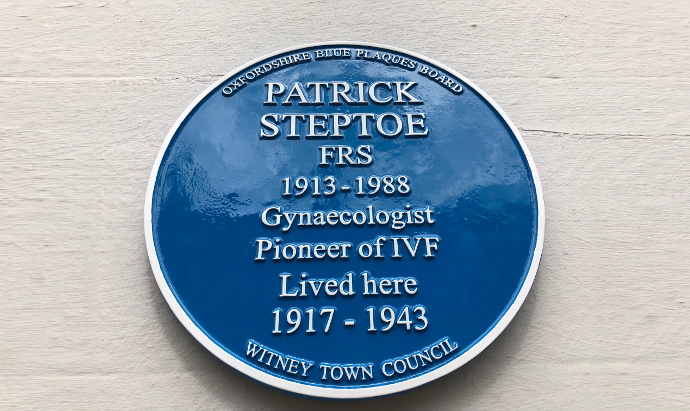