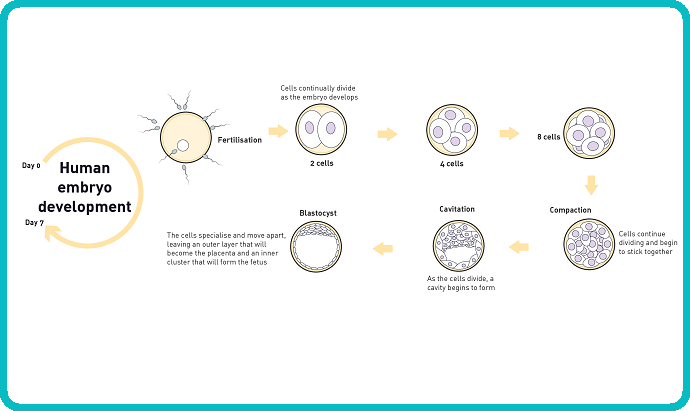 Embryos used in ground breaking research at the Francis Crick Institute were donated by patients who had undergone fertility treatment at Bourn Hall.  The majority had completed their families through IVF treatment and wanted to help other infertile people by donating their remaining embryos to help understand the fundamental processes of embryo development through this research study.

After the egg is fertilised, it divides until at about 7 days it forms a ball of around 200 cells called the ‘blastocyst’.  The study found that human embryos need the gene OCT4 to correctly form a blastocyst.

“We were surprised to see just how crucial this gene is for human embryo development, but we need to continue our work to confirm its role,” says Dr Norah Fogarty from the Francis Crick Institute, first author of the study.

Dr Kathy Niakan from the Francis Crick Institute, who led the research, adds: “One way to find out what a gene does in the developing embryo is to see what happens when it isn’t working.”

The team used genome editing techniques to stop a key gene from producing a protein called OCT4, which normally becomes active in the first few days of human embryo development.

Dr Niakan continues: “Now we have demonstrated an efficient way of stopping the gene working, we hope that other scientists will use it to find out the roles of other genes. If we knew the key genes that embryos need to develop successfully, we could improve IVF treatments and understand some causes of pregnancy failure. It may take many years to achieve such an understanding, our study is just the first step.”

Time-lapse videos showing the first five days of embryo development. The embryo on the left is unedited, whereas the right has been edited to prevent it producing the OCT4 protein. The unedited embryo forms a stable structure called a ‘blastocyst’ but the edited embryo does not, showing that OCT4 is essential for blastocyst development. (Credit: Dr Kathy Niakan/Nature) Video from The Francis Crick Institute.

“This research will helping us to identify the factors that are essential for ensuring that human embryos can develop into healthy babies and in future this knowledge will significantly improve treatment for infertile couples.”

The team spent over a year optimising their techniques using mouse embryos and human embryonic stem cells before starting work on human embryos. To inactivate OCT4, they used an editing technique called CRISPR/Cas9 to change the DNA of 41 human embryos. After seven days, embryo development was stopped and the embryos were analysed.

The embryos used in the study were donated by couples who had undergone IVF treatment, they had completed their family and wanted their frozen embryos to be used for research. The study was done under a research licence and strict regulatory oversight from the Human Fertilisation and Embryology Authority (HFEA), the UK Government’s independent regulator overseeing infertility treatment and research.

Create and use stem cells 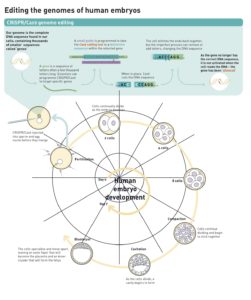 As well as human embryo development, OCT4 is thought to be important in stem cell biology.

‘Pluripotent’ stem cells can become any other type of cell, and they can be derived from embryos or created from adult cells such as skin cells. Human embryonic stem cells are taken from a part of the developing embryo that has high levels of OCT4.

“We have the technology to create and use pluripotent stem cells, which is undoubtedly a fantastic achievement, but we still don’t understand exactly how these cells work,” explains Dr James Turner, co-author of the study, from the Francis Crick Institute. “Learning more about how different genes cause cells to become and remain pluripotent will help us to produce and use stem cells more reliably.”

Sir Paul Nurse, Director of the Francis Crick Institute, says: “This is exciting and important research. The study has been carried out with full regulatory oversight and offers new knowledge of the biological processes at work in the first five or six days of a human embryo’s healthy development. Kathy Niakan and colleagues are providing new understanding of the genes responsible for a crucial change when groups of cells in the very early embryo first become organised and set on different paths of development. The processes at work in these embryonic cells will be of interest in many areas of stem cell biology and medicine.”

Dr Ludovic Vallier, co-author on the study, from the Wellcome Trust Sanger Institute and the Wellcome – MRC Cambridge Stem Cell Institute, said: “This study represents an important step in understanding human embryonic development. The acquisition of this knowledge will be essential to develop new treatments against developmental disorders and could also help understand adult diseases such as diabetes that may originate during the early stage of life. Thus, this research will open new fields of opportunity for basic and translational applications.”

The research was published in Nature and led by scientists at the Francis Crick Institute, in collaboration with colleagues at Cambridge University, Oxford University, the Wellcome Trust Sanger Institute, Seoul National University and Bourn Hall Clinic. It was chiefly funded by the UK Medical Research Council, Wellcome and Cancer Research UK.

The research paper, ‘Genome editing of OCT4 reveals distinct mechanisms of lineage specification in human and mouse embryos’, will be published in Nature after this time; it will be available at: http://dx.doi.org/10.1038/nature24033