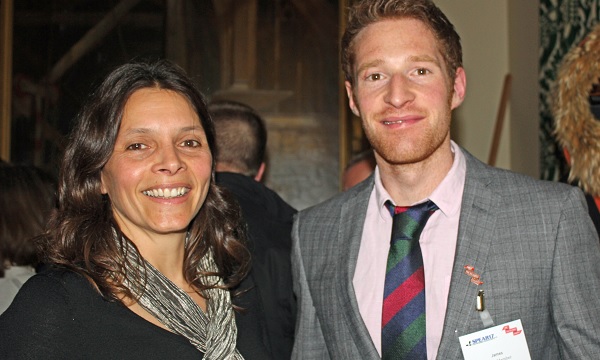 Jamie Facer-Childs (28), one of the first frozen embryo twins in the world, plans to make history again as part of the first British team to ski unsupported and unassisted across the freezing cold South Pole. His proud mum Rosemary Facer attended the expedition launch at Westminster Palace along with Dawn Course of Bourn Hall to show their support for Jamie’s next freezing adventure.

In 1986 and longing to have a family Rosemary Facer heard on the radio a discussion about Bourn Hall’s pioneering work. She says: “At the time I went to Bourn Hall Clinic their new freezing technique was a kind of adventure – an unknown territory in the field of IVF.

“We were seen by Patrick Steptoe and with the help of his wonderful staff my twin boys were born in 1987. We were so proud of Jamie and his brother Ben then and still are today. Jamie’s always been an adventurous type – at 21 he rowed the Indian Ocean – and now he’s involved in this amazing trip.”

Jamie was one of the first 1000 babies born as a result of IVF treatment at Bourn Hall. Dawn Course, Business Services Director for Bourn Hall says: “When Jamie told us about his latest remarkable endeavour, to reach the South Pole and raise a flag for Bourn Hall, we felt honoured to be a part of his adventure.”

Jamie and five other Army Reserve soldiers will in total journey 1,100 miles; each hauling a sled weighing around 150kg and in temperatures as low as minus 50 degrees Celsius. All in an attempt to enter the history books as the first British team to achieve a full transverse on foot and to raise £100,000 for the ABF The Soldiers’ Charity (formerly the Army Benevolent Fund).

Jamie explains how he came to be involved in this expedition: “I have been serving in the UK Army Reserves for the past four years to fund myself through medical school and since the Ocean Rowing Race in 2009 – crossing the Indian Ocean as part of a two man rowing team – it has helped satisfy my ongoing love for adventure and challenges.

“In many ways being an IVF baby gives me a drive to push myself to extremes. So when I heard about the expedition to Antarctica last year I immediately asked the leader Louis Rudd if I could attend and luckily I was selected.”

To launch ‘South Pole Expedition Army Reserves 2017’ (Spear17) an event was recently held at Westminster Palace. Defence Minister Julian Brazier MP, whose son Doctor Alex Brazier is part of the team, commented: ”This is a really remarkable endeavour, only six people have managed what they are trying to do before and I am very proud that my son is involved. Most importantly this expedition sends a really clear message about what the Army Reserves can achieve.”

The six man team will start on the Antarctica coastline in November aiming to reach the South Pole in the middle of January and to raise a flag for Bourn Hall before continuing on.

Rosemary concludes: “Thanks to Bourn Hall I have three wonderful children: Jamie, his twin Ben, and their younger sister Elise. They are all doing amazing things and I’m so proud of them.”

If you have been inspired by Jamie’s story and would like to know more about how you could help someone become a parent visit our donor site.