Claire met her husband John through a lonely hearts advert in the ‘Beds on Sunday’ in 1999, before the days of internet dating, and they always assumed that they would have children some day but those dreams were shattered when John was diagnosed with cancer.

John was diagnosed with non-hodgkins lymphoma and, as treatment with chemotherapy can affect your fertility, he was offered the option of freezing his sperm which he accepted.  After two difficult years which included a stem cell transplant he went in to remission.

Five years later the couple decided to start a family and after fertility testing it was confirmed that they would need IVF treatment. They were offered NHS funding and after some research, chose the world-famous Bourn Hall.

John’s sperm had been stored at Hammersmith Hospital and as John didn’t want to risk having the sperm couriered he drove it up to Bourn Hall himself. He says driving with the box of dry ice “was like something out of Back to the Future.”

The first cycle of treatment was successful and the couple broke the news to both sets of prospective grandparents at the same time in a local restaurant.

“We decided to photocopy the baby scan on to the back of the menu and then sat the parents opposite each other. It took them a while to realise and we had to spell it out to them!” laughs Claire. “They were all over the moon – tears, especially John’s parents who had envisaged he would never have a family.”

The couple then went on to have two further IVF babies funding the treatment themselves.  Robynne was born two years after Sydney, and Kennedy, their third daughter, is now 14 weeks old.

Each child was born following their first IVF attempt.

“For all three children we didn’t tell anyone we were having treatment as it took the pressure off,” says John. “With each scan you go up the ladder but the further up the ladder you go you know that you have further to fall and you have to keep your hopes up. We have been so lucky. Parenting is the most challenging and rewarding job.

“Bourn Hall staff are fantastic. They were open and honest and managed expectations. We took Sydney and Robynne when Claire was being treated for Kennedy and they were so delighted to see the fruits of their work. And that was everyone starting from the ladies on reception.”

Claire is now a self-employed dressmaker, which allows her to balance motherhood and work.

“We are so proud of the girls, we have been through so much to get here,” she beams. 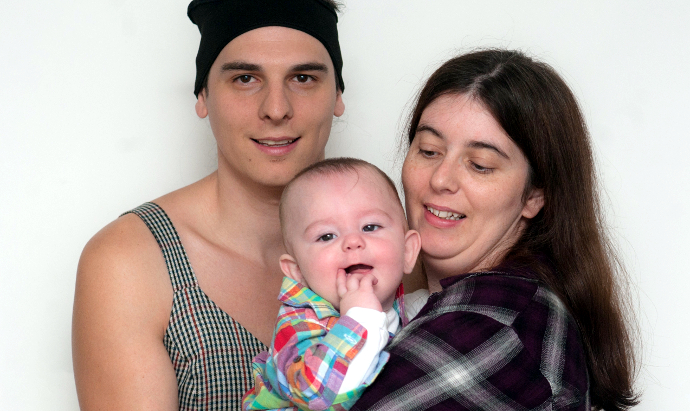