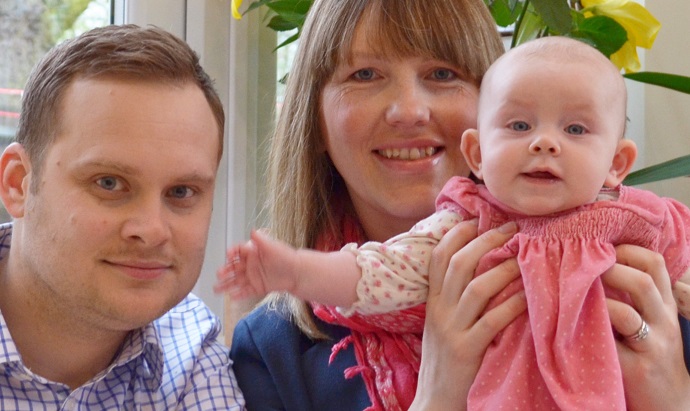 Having gone through a painful miscarriage Robert and Rebecca embarked on an IVF treatment after gaining advice after fertility check.

“Being a mother is an unbelievable feeling.  It gives you a sense of purpose, having a little person who depends on you and always comes first.  We’ve been through a lot to have our baby girl but it’s been absolutely worthwhile now she’s here!”

So says Rebecca, 37, proud mum to baby Amelie, born on 12 November 2013 following IVF treatment at Bourn Hall Clinic in Cambridge. Amelie arrived after four tough years for Rebecca and husband Robert; the couple endured the pain of a miscarriage before deciding to give IVF treatment a try.

Rebecca explains: “Robert and I married in 2007 and started trying for a family a couple of years later.  We were both chuffed when I fell pregnant naturally and everything appeared to be going to plan.

“I went for my 12 week scan at the hospital and that’s when we found out the baby had gone. My body still thought I was pregnant which is why I hadn’t realised.  The miscarriage was devastating – by far the worse thing I’ve ever been through.  To come so close to motherhood and then lose the baby really did upset us both.

“Our doctor said I would be more fertile after coming pregnant and urged us to keep trying.  Month after month passed and nothing happened, which we both found difficult.  Instinct told me something was wrong.”

Rebecca and Robert went to see their GP who referred them for fertility testing at their local hospital.  The tests came back normal but Rebecca still felt something was not right.  She and Robert decided they wanted more tests done and went to Bourn Hall’s Cambridge clinic for a Fertility Check.

A Fertility Check is a package of tests that provide more in depth information about underlying fertility issues. It involves a blood test to measure levels of AMH hormone which indicates a woman’s ovarian reserve and a pelvic ultrasound scan to check for blockages, cysts or structural problems. A semen analysis will check a man’s sperm count, size and motility (movement) and all the results are discussed in a consultation with a fertility specialist.

Additional tests can check for levels of progesterone hormone, to confirm a woman is ovulating. Further ultrasound scans where a dye is injected into the fallopian tubes check for blockages.

Rebecca says: “I’m so glad we went for a fertility MOT because they identified we did have a problem.  The consultant at Bourn Hall recommended we took these results back to our doctor to discuss them.

“After further consultations we were referred for IVF treatment and chose Bourn Hall. The staff are so helpful and supportive – it was an easy decision to go back.”

Bourn Hall is one of the best performing clinics in the UK.  Recent success rate data for 2013 showed a 55.8% clinical pregnancy rate for women 37-years old or under. Although fertility declines with age, the results for women over 38-years old are also excellent, with 38.2% achieving pregnancy.

“It was a rollercoaster of emotions”

Rebecca and Robert’s Bourn Hall fertility consultant recommended them to have IVF with ICSI (intracytoplasmic sperm injection). ICSI involves injecting a single sperm directly into the egg to fertilise it. The resulting embryo is then transferred into the womb.

The treatment was successful first time and Amelie was born nine months later weighing 8lb 13oz.  Rebecca and Robert could not be happier and have the following advice to couples contemplating their own IVF journey.

“Going through the treatment wasn’t easy, especially as I had just started a new job. I was worried about the injections but Robert helped me with these and it made him feel a bigger part of the process.

“It was a rollercoaster of emotions, but now we have Amelie it seems a lifetime ago. I would urge anyone not to give up on their parenting dreams and try and stay positive, even through the difficult times.

“We thought we might have to pay for our IVF treatment, but when we found out that we could have help on the NHS it was fantastic and such a relief. Our GP was great too and was really supportive. She advised us on the best way forward and was always on the end of the phone if we needed her. Without Bourn Hall and the NHS funding we wouldn’t be where we are now and we might not even have Amelie in our lives. We can’t thank them enough.

“There’s so much that can be done to help couples and I’d have always regretted not having IVF if we’d chosen not to do it.”