“Trying to get pregnant when everyone around you seems to find it easy is heartbreaking,” says Charlotte from Bedford.  “It got to the point for me that I stopped going to christenings because I knew that I would get really upset and spoil it for everyone.

Worried I would have no friends left

“My friends were always really understanding but I did start to panic that if I didn’t have children, I would get to 40 and have no friends because I had cut myself off socially or alienated people. That became more and more of a worry.”

Charlotte was 24 when she met Harry when they were both classical singers in London and their relationship became serious very quickly. “I had always known that I wanted children and made it clear to Harry from the start that it was something I wanted ,” she says.

The couple got married when Charlotte was 29 and Harry was 36 and had no reason to think that they would struggle to start a family.

Most couples don’t know that they have a fertility issue until they start trying to conceive and even then it can sometimes be several years before they are referred for tests.

“I went to see my GP after we had been trying for around a year and she was very sympathetic,” says Charlotte. “We were both sent for tests and although Harry’s tests showed up some issues we were told we would have to wait another year before we could be referred to our local hospital for further investigation.”

Distraction during the wait for investigation

Over the next 12 months the couple tried to eat as healthily as they could and Harry gave up alcohol but still Charlotte didn’t fall pregnant.

“Two years after we had first started trying for a baby and I was thinking ‘why is this happening to us? What is going wrong?’” says Charlotte.

“Harry found it quite tough as I used to get really upset a lot of the time about us not having a child.

“I used to find going on social media really difficult at times when friends were announcing pregnancies or posting photos of their children and I would suffer from massive FOMO (fear of missing out).  I would actually avoid social media at certain times of the year such as Mother’s Day.”

Distraction was one of the ways that Charlotte coped. She embarked on a Masters degree in Choral Studies at Jesus College, Cambridge, and she feels that it was really important for her to have a ‘project’.

“It was great because I was one of the oldest people on the course and was surrounded by young twenty-somethings who were at a completely different stage in their lives and didn’t talk about babies at all, it was brilliant,” she says. 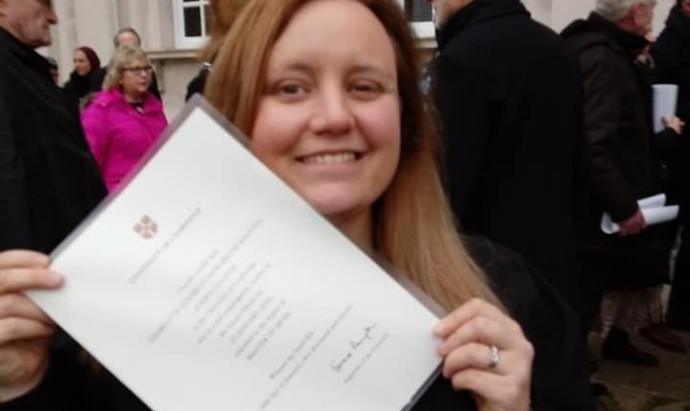 After testing at the local hospital Charlotte was put on clomid to stimulate her ovaries before the couple were referred for IVF treatment.

“We were entitled to NHS-funded IVF and chose to go to Bourn Hall’s Cambridge clinic which was a short drive for us,” says Charlotte.

“At Bourn Hall we were told that Harry actually had a really high sperm count, it was just the shape of them which was causing a problem, and we were really reassured by that. Scans also revealed that I had polycystic ovaries which came as a complete surprise although I have always had a bit of an issue with facial hair growth and maintaining a healthy weight .”

Charlotte and Harry were treated using  IVF with ICSI – intracytoplasmic sperm injection which is used when the sperm needs a bit of extra help to achieve successful fertilisation. A woman’s eggs are collected in the same way as IVF and a single sperm injected in to the centre of each mature egg to assist fertilisation in the laboratory.

“I produced 17 eggs which was really exciting, 14 of which were mature,” says Charlotte. “I was asked if I would like to donate my three immature eggs to research being undertaken at Bourn Hall and I was more than happy to do that. It just felt really good to do that and contribute towards such important research.”

After embryo transfer, the couple went home and waited two weeks before taking a pregnancy test.

“I had never been pregnant before so had absolutely no idea what it felt like,”

“I geared myself up for a negative pregnancy test “says Charlotte.”So, when it was positive I didn’t really know how to feel! I just felt shellshocked! Harry was conducting a concert that day and did it very exuberantly whilst I was in the audience and couldn’t concentrate at all!!”

Charlotte is full of praise for the team at Bourn Hall. “Everyone was so professional and compassionate. Everyone right from the receptionists to the nurses and consultant made us feel really relaxed and were happy to answer any questions we had. They explained everything really well. They really cared about us as people and got everything absolutely right as far as we are concerned.”

Coping with the waiting

Many people waiting to have fertility tests or be referred for fertility treatment in 2020 had to put their lives on hold because of the pandemic, Charlotte shares her coping tips:

“Find a distraction just for you and have a project. For me that was doing my Masters but it could be anything. A lot of people get pets I think, we spent a lot of time with our Labrador Mungo. Continue to do things for you during that time and don’t put things off.  Find people to talk to, I joined a Facebook group for people undergoing IVF and I also had counselling, just don’t let it all become a negative. “

A couple of months after finding out they were pregnant Charlotte attended a graduation ceremony to collect her Masters degree – she graduated top of her year with a Distinction.

“I joined a choir at Cambridge and at our first get-together everyone had to share something about themselves and one of the choir members revealed that she had been an IVF baby.

“She subsequently told me that she had always felt really special because her parents had always emphasised to her how much she had been wanted and it was really nice for me to hear that.”

In July 2020 Charlotte and Harry welcomed daughter Heidi into the world. “I was really chilled, I even started singing at one point when I was in labour, it must have been all the gas and air!” Charlotte laughs. 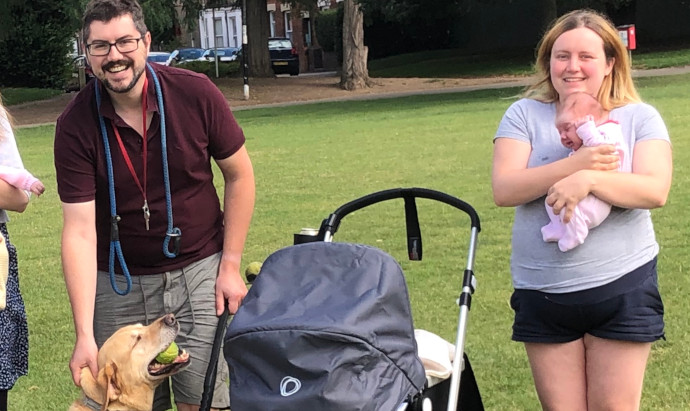