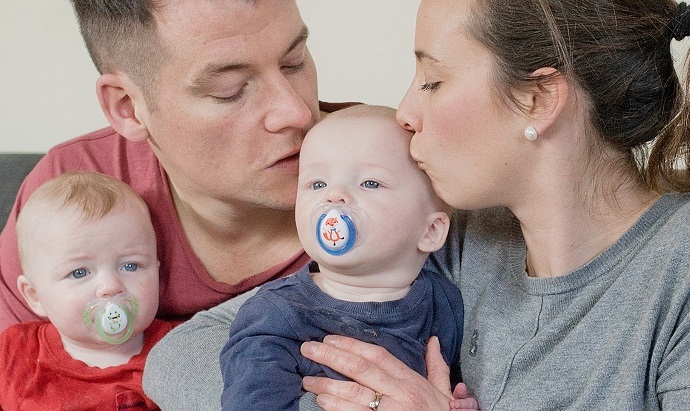 When Fraser was diagnosed with Klinefelter Syndrome, it was possible he would never become a dad. Thanks to sperm donation, he is now a father to three boys.

At 20 Fraser felt he and his partner Nina were still too young to consider starting a family, but then suddenly his hope of ever fathering a child was snatched away from him.

The couple met in 2004. Shortly afterwards it was found that Fraser had Klinefelter Syndrome, a genetic condition that affects about one in 600 new born boys. The baby is born with an extra X sex chromosome in his cells – XXY, rather than the usual XY. This second X chromosome carries extra copies of genes, which interferes with the development of the testicles and can make the carrier infertile.

Most men with Klinefelter Syndrome have normal lives, jobs and relationships, and will be unaware of their chromosome variation. It is a condition that can be treated with Testosterone Replacement Therapy but this won’t restore fertility.

Nina begins: “Learning Fraser was infertile was a huge shock for him and us as a couple. Initially we buried the topic under the carpet before realising if we ever wanted to have children we needed to discuss our options and see our GP.”

In May 2011, Nina and Fraser confirmed their love for each other and were married; a month later they had their first consultation at Bourn Hall’s Cambridge clinic.

The couple had been referred for NHS funded IVF treatment and given a choice of clinics.  Nina explains: “Following our research we opted to go there. We knew Bourn Hall had excellent success rates and it was a much better setting than the other hospital options we’d been given.”

The couple would need donor sperm for treatment and Bourn Hall has its own sperm bank. Sperm donors are anonymous but provide a short pen picture about themselves and a message to be given to any future children arising from treatment. A donor is selected that has similar physical characteristics to the future parents.

Nina continues: “As we were using donor sperm, we filled out the necessary paperwork, giving details of physical characteristics like height, eye and hair colour. A few days later we were sent a couple of matching profiles. We picked the one we thought most suited.”

Sufficient sperm is reserved for treatment and also for future siblings.

“The whole process was very quick,” she says.

Following successful IUI (Intrauterine Insemination), a form of assisted conception treatment involving the injection of sperm into the womb at the time of ovulation, Nina gave birth to Alfie in February 2012.

“Although our first treatment was NHS-funded, if we wanted to give Alfie a brother or sister this further treatment would be self-funded so we would have to save up for this.”

In early 2013 the couple returned for two further IUI treatments, but both were unsuccessful. The couple were devastated.

Nina explains: “We decided to take a break before returning to Bourn Hall to discuss our options. Initially we thought IVF was too expensive to even consider but then we learnt of the egg donor programme.”

As Nina was only 28, fit and healthy she would be eligible for consideration for egg sharing; this is when a woman shares half her eggs with another patient and in return receives free treatment.

“Egg sharing gave us a way to get IVF, which we badly wanted, and we could also help another couple. As someone had kindly donated sperm to us it seemed a no brainer to give something back.”

All Bourn Hall patients are offered complementary counselling, but for egg donors this is obligatory.

“Fraser was initially reluctant to go as he wasn’t sure how it would help, but we did find the opportunity to talk to an impartial person and hear different perspectives useful. It confirmed for me that egg donation was definitely right for us and Fraser even said it was ‘helpful’.”

Within a few weeks a match was made with another lady and then it was a matter of synchronising the two patients’ treatments to ensure both were ready at the same time for embryo transfer.

The collected eggs were shared between the two ladies.

Nina was given IVF with Intra-cytoplasmic sperm injection (ICSI) where the embryologist selects a single sperm and injects it directly into the egg.

Nina says: “Having decided this was our last go we opted to have two embryos put back in so hopefully one would develop into a baby.”

A scan at Bourn Hall confirmed Nina’s positive home pregnancy result and subsequently the couple learnt they were expecting twins. 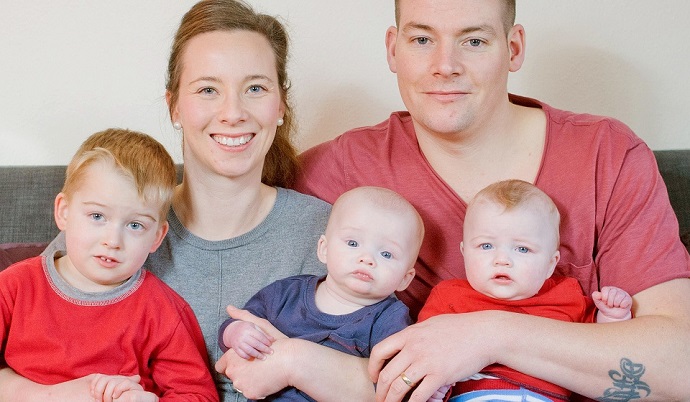 “We are extremely delighted to have our twins; initially it was a shock learning we were expecting them but from then on it was so exciting preparing for their arrival.

“Fraser is an amazing Dad and dotes on them. I think especially as he realises there was a high possibility that without Bourn Hall we wouldn’t have been able to have any children.

“We’re now settled with three but I would consider egg donation again as it helps others and most certainly it would be at Bourn Hall.”