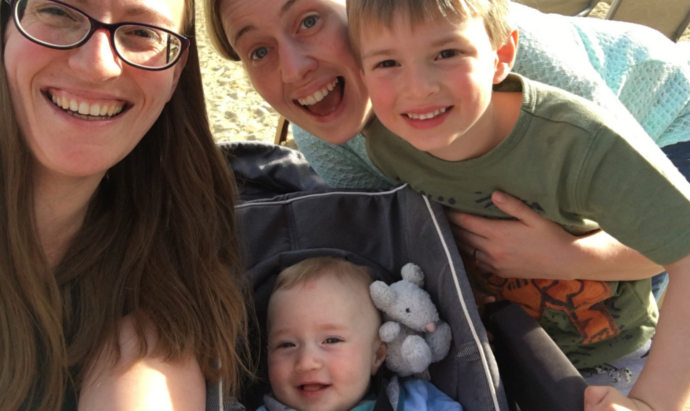 It is very important to have a screened sperm donor when starting a family. Elie and Sarah avoided risk by approaching Bourn Hall Clinic.

When Elie and Sarah decided to start a family, the option of finding and contacting a sperm donor  on the internet or through social media was completely out of the question.

“We have heard some horror stories of people who have found a sperm donor on the internet,” says Elie. “We wanted to do things properly and without risk to us or our future children.”

‘Doing things properly’ involved the couple going to Bourn Hall Clinic, the world’s first IVF clinic, which is regulated by the HFEA and has its own sperm bank.

Bourn Hall screens all sperm donors to ensure that they are free of infections, diseases or genetic conditions. Donors are asked about their medical and family history and undergo a medical examination and blood tests. The clinic rigorously screens all sperm samples and then freezes them and quarantines each sample for six months – after this time donors are then invited back to repeat their blood tests. If the donor passes these screening tests the frozen semen samples are then available to be used in treatment.

All donor sperm is stored frozen and then defrosted on the day of treatment.

Elie and Sarah are now mums to two boys and with both of their children it was agreed that Elie should carry the pregnancies. They had their first son Joshua in 2011 following treatment at Bourn Hall and he was very excited to learn in early 2015 that he was going to be a big brother.

“His first question to me after I picked him up from school and told him about my 20 week scan was, ‘did it have a willy’?” laughs Elie. “He was absolutely desperate for a brother – I don’t know what he would have done if it had been a girl!” Little brother Thomas was born at the end of 2015.

IUI  involves injecting prepared sperm into the womb around the time of ovulation, when the ripe egg is released. If you are not using fertility drugs, this will happen between day 12 and 16 of your monthly cycle (with day one being the first day of your period) as this is when you are at your most fertile. A blood or urine test will be used to identify when you are ovulating. The use of fertility drugs is often advised as this controls the cycle and maximises the chance of success.

Elie says that they were really lucky with IUI the first time around and she fell pregnant quickly with Joshua. Second time around IUI didn’t work so well and after five negative pregnancy tests the couple were advised to try IVF.

IVF is when the ovaries are stimulated with fertility drugs and the eggs are collected and fertilised with sperm. Sometimes this will be by intracytoplasmic sperm injection (ICSI) where a high quality sperm is injected directly into the egg. This increases the chance of successful fertilisation. The embryos are then allowed to develop to blastocyst culture – a 5-day embryo (which is the stage it would be naturally when it arrives in the womb) is then transferred to the womb through a fine catheter. For a same-sex couple IVF offers more options, for example some choose that one partner produces the eggs and the other carries the pregnancy.

IVF was a big decision

For the Hughes’ having IVF was a big decision, particularly as the only infertility issue was the lack of sperm. Elie says: “I wondered with IVF whether the drugs would strongly affect my moods but I just felt a bit hormonal.

“We could only afford one round of IVF as it is more expensive than IUI but we got the result we wanted first time.”

By going through a clinic the couple were assured that they would both have legal parenthood of the children. The sperm donor would have no legal rights and no moral or financial role in the children’s upbringing.

Elie and Sarah made a very conscious decision that they would use sperm from the same donor for both their children and reserved “sibling sperm” for this purpose. “We are not interested in who the sperm donor is although we are hugely grateful that he donated sperm,” says Elie. “But we decided that if the boys ever wanted to go down the route of finding out more about the sperm donor, in the same way that an adopted person might want to find out more about their biological family, they would have the same shared experience rather than two different ones.”

Being a family of four is “just lovely” says Elie. “We always wanted two children.”

Having ‘two mummies’ and now a brother means that for Joshua, aged five, “everything is balanced” says Elie. “He says now we have two of everything: two mummies, two boys and two cats!”

For Elie and Sarah, they delight in seeing how Thomas and Joshua interact with each other. “Thomas adores his big brother,” says Elie. “His first giggle was for Joshua. We love taking the two of them on days out.”

The couple are so glad they chose Bourn Hall to help them have their family. “Bourn Hall Clinic was very reassuring and the least risky option for our family,” says Elie. “We felt that we were ‘getting the best’ and are so lucky to live so close. We have already recommended Bourn Hall to some of our younger friends.”

For more information about use of donated sperm

To read more about treatment options for same sex couples.