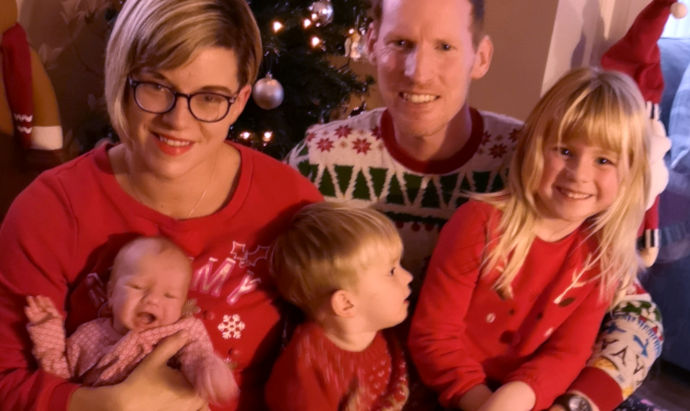 After years of trying to get pregnant Emma and Ryan finally became parents after IVF at Bourn Hall and then had a couple of surprises.

“Six years ago we thought we might never have children and now we have three, one conceived after IVF and two conceived naturally,” says Emma. “It is crazy, I can’t believe it. I don’t know how but I think that after the successful IVF my body finally said ‘I know what to do’. It is amazing, it is just mad.

“I married Ryan ten years ago and, perhaps naively, I thought ‘lovely, we will have a baby now’ and assumed that it would just happen.

“When I wasn’t pregnant after six months I was okay about it but when it got to a year I thought ‘this is a bit weird’. We got all the ovulation monitors and I started reading up about all the things you can do to improve your fertility. I was always looking new things up but maybe that was the problem, I was overthinking everything and so when I was ovulating it was like ‘come on we had better get on with it’ and it all became a bit military. It wasn’t natural and became almost like an obsession and looking back I don’t think that is very healthy as I felt really stressed.

“All my friends were having babies and at my workplace people were always coming in and announcing they were pregnant. It was the same on social media, I couldn’t escape it. I was always being invited to baby showers and would sit there thinking ‘what is wrong with us? Why can’t we get pregnant?’

“We’d been trying for two years and I said to Ryan ‘it might be a good idea to go to the doctors just to check that nothing is wrong?’. My periods had always been pretty regular although funnily enough they had started to go a bit higgledy-piggledy.”

Emma and Ryan were referred to their local hospital for tests where it was found that Emma had polycystic ovaries.

Thought it was my fault

“Ryan had sperm tests done and everything came back fine so I was put on clomid but it didn’t work and my periods wouldn’t play ball. But again I think that there was too much pressure and stress thinking about everything too much and being told exactly when the right time was to have sex and it was so planned that I think it put pressure on Ryan too. Men don’t talk about it as much as women but it was difficult for him too.

“I felt so emotional throughout all of it and I remember one day I was so upset because I thought it was all my fault. There was nothing wrong with Ryan and I felt really guilty. And he was so supportive and amazing, it can’t have been easy for him seeing me go through it.”

After a number of rounds of clomid at the hospital didn’t work the couple were referred for NHS-funded IVF at Bourn Hall.

“I didn’t know anything about IVF,” says Emma. “We went to an open evening and I felt good about it because I thought ‘well at least something is happening, something positive, a step closer to having the family we were so desperate for.”

The couple, who at the time were entitled to three rounds of NHS-funded IVF, were devastated when they didn’t fall pregnant after their first round. “We were told to wait six months before we tried again to give my body time to calm down after all the injecting and everything,” says Emma. “It was quite a hurdle. We went to London to see The Lion King for Ryan’s birthday and I cried all the way through.”

Second time around the couple did not have any embryos of good enough quality to transfer. “We booked a holiday to Turkey and flew there two weeks later. I am not going to lie I said to Ryan ‘I am not sure if I can go through IVF again.”

When they returned from holiday the couple, who were entitled to one more round of NHS-funded IVF, agreed to give it one last try.

“On our third time something felt different,” says Emma. “On the day I had to take my pregnancy test I was awake from 4am, I couldn’t sleep and so we did the test early. And OMG when we saw the positive line it was amazing it was the first time I had ever seen a positive pregnancy result in my life. We just looked at each other in disbelief!”

Emma and Ryan kept the pregnancy a secret until they had their 12 week scan – which was on December 23.

“Over that Christmas we were so happy we just kept smiling, it was the best Christmas present ever.”

“We were so happy and thought that it would always be the three of us. I am an only child as my parents struggled to have me and although we thought it would be nice to have a sibling for her we didn’t have any embryos frozen at Bourn Hall and thought that was it.

“After I’d had Ruby my GP mentioned that I might want to go back on to contraception and I said ‘I don’t want to go on anything it has taken me five years to have my little girl and if I get pregnant again I am fine with it’. So we weren’t trying but we weren’t not trying either.

“And then in 2017 I fell pregnant naturally but unfortunately we had a miscarriage.

That was really hairy and I was absolutely devastated but at the same time was thinking ‘wow I haven’t had IVF and have got pregnant so obviously my body can do it but it wasn’t meant to be.’ So I was gutted for a long time and we just carried on and enjoyed Ruby and and then literally the next year we found out that we had conceived naturally again.

“We didn’t tell anyone I was pregnant because of what had happened last time but we pushed for an early scan at 9 weeks and all was fine and that was my little boy Dylan who was born in March 2019. Ruby and he are so close they have such a special bond.

“Then we had another surprise when just before Dylan’s second birthday I woke up feeling a bit odd and we were about to do some manual work in the garden, moving a shed and putting a new lawn down, so I went to Tesco and got a pregnancy test just to check. I couldn’t believe it when it was positive, it took quite a while to process, it was a big shock. I thought ‘this is ridiculous we tried for years to have a baby and now I am 37 and the clock is ticking and I have got pregnant naturally again without even trying.”

“I would say to anyone going through infertility, be strong,” says Emma. “We will be forever grateful to the staff at Bourn Hall. IVF was an extremely hard, gruelling and emotional process but all the staff and doctors always made us feel at ease, and without them our dreams would not have been realised.”