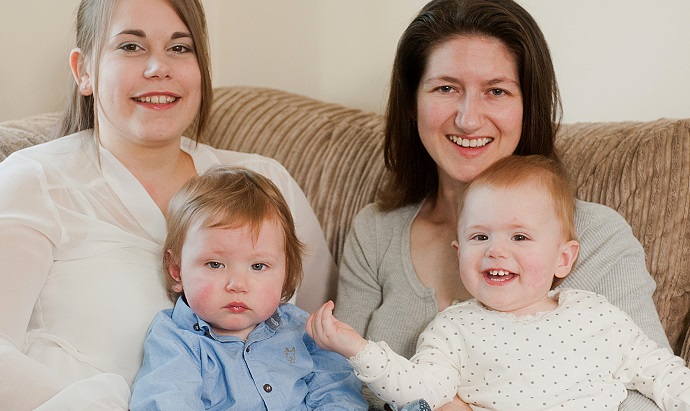 When Kerry and Stacy decided to start a family, they visited Bourn Hall to investigate fertility treatment using donor sperm – they are now mums to twins.

When twins Rorie and Logan from Norfolk celebrated their first birthday surrounded by family and friends, it signalled the end of an emotional rollercoaster for their parents Kerry and Stacy.

Kerry (aged 33) and Stacy (25) met at work four years ago and after deciding to start a family, approached Bourn hall Clinic to investigate fertility treatment using donor sperm with IUI.

The couple agreed that Kerry would carry the pregnancy. Nationally there is a shortage of sperm but Bourn Hall Clinic, the world’s first IVF clinic, was also one of the first to freeze and store sperm. It has its own sperm bank so it is possible to select your donor and reserve ‘sibling donor sperm’ so that further children are genetically related.

Kerry says: “Following initial consultations we had to select a sperm donor. Kerry and I reviewed the description details we’d been given for a few anonymised sperm donors, including eye colour and hair. We selected one, which we are grateful for, but to be honest we didn’t really want to know much about the donor so we were fine with it being anonymous. For us what was important was to have a child.”

The couple funded their own treatment and Kerry started taking a course of fertility drugs to help stimulate her egg production.

Third time the charm with IUI

Bourn Hall used Intrauterine Insemination, otherwise known as IUI, which is a delicate process which involved sperm being injected into Kerry’s womb, close to the time of her ovulation.

Unfortunately Kerry’s first and second IUI treatments were unsuccessful so Kerry and Stacy were absolutely delighted when in February 2013 Bourn Hall confirmed that after their third attempt Kerry was pregnant.

Stacy explains: “Our journey to have a child had been a real emotional rollercoaster. To begin with we seemed to have no luck but thank goodness for Bourn Hall and their support.”

“When the specialist told us we were expecting twins we couldn’t believe our luck!”

A week after the couple found out that they were finally to become parents they returned to Bourn Hall for a check-up scan – and were delighted to be told Kerry was carrying not one, but two babies!

“We were so excited to know we were going to have a baby and then when the specialist told us we were expecting twins we couldn’t believe our luck!” says Kerry.

Stacy confirms: “Yes, we were over the moon and our luck had literally doubled.”

Proud mums to Rorie and Logan

On 27th September 2013 Kerry was admitted into Norwich Hospital and twins Rorie and Logan were successfully delivered by caesarean section.

Kerry reflects: “Amazingly a year has now rushed by and we’ve just celebrated the twins first birthday. We had all our family and friends around to eat cake and we even had a bouncy castle.

“It has been a real emotional roller coaster to get here and we certainly count our blessings. It was definitely a case of third time twice lucky!”